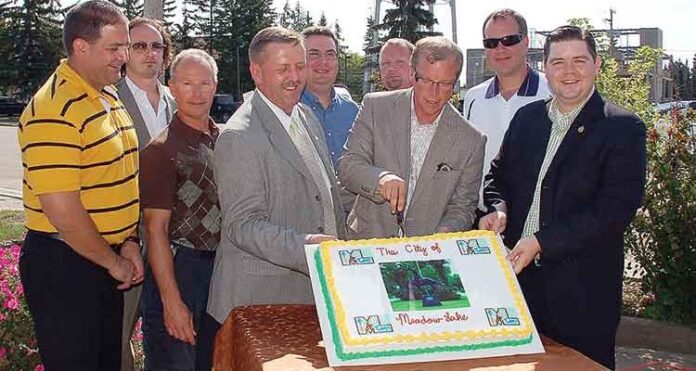 That’s how councillor Curtis Paylor, who also served on council when Meadow Lake transitioned from a town to a city, feels about the progress the municipality has made in the last decade.

“I believe it’s been successful,” Paylor said when comparing the Meadow Lake of today to the vision council had for the community back in 2009. “The council of the day was looking at the numbers. With a population of 5,000, we were eligible to become a city, and the reason we decided to pursue this is because provincial growth was very high at the time. The provincial government was really promoting that fact and encouraging towns that had reached that 5,000 population threshold to make the transition. We were promised there would be no change in terms of finances provided to municipalities, so we approached the transition to city status from more of a self promotion and economic growth aspect.”

Meadow Lake officially became a city Nov. 9, 2009. It was one of three towns – the others being Warman and Martensville – to make the change on that day, with Meadow Lake officially classified as Saskatchewan’s 14th city. The formal announcement came more than two months earlier, however, when then Premier Brad Wall and Meadow Lake MLA Jeremy Harrison joined then mayor Darwin Obrigewitsch and members of council for a special cake cutting ceremony to mark the occasion.

“The entire process wasn’t too difficult,” Paylor recalled. “Because the province was promoting growth at the time, all we had to do was make our intentions known, while the town administration of the day completed the necessary application. Once we had the census numbers to confirm we had a population of at least 5,000, the process went forward.”

According to current mayor Merlin Seymour, Meadow Lake has experienced small growth since that time.

“The most recent census shows 5,266 residents,” Seymour said. “I feel this is attributed the new and expanding businesses within our community. The agriculture and forestry industry are major components in and around Meadow Lake, as well as tourism in the nearby Meadow Lake Provincial Park and the various top notch recreation facilities in our community. Hosting the Saskatchewan Summer Games in 2012 showcased our little city to the rest of the province. I had conversations with many people who had come to Meadow Lake for the first time and they were more than impressed with what Meadow Lake had to offer. This year also saw our neighbouring community of Flying Dust First Nation host the Tony Cote First Nation Summer Games on their land, as well as at various venues throughout the City of Meadow Lake.”

In spite of this, many long-time residents still consider Meadow Lake to be a town while others have made light of the community’s city status based on the fact it still boasts only one set of traffic lights. Nevertheless, Paylor is still pleased with how much the community has both improved and benefited since becoming a city.