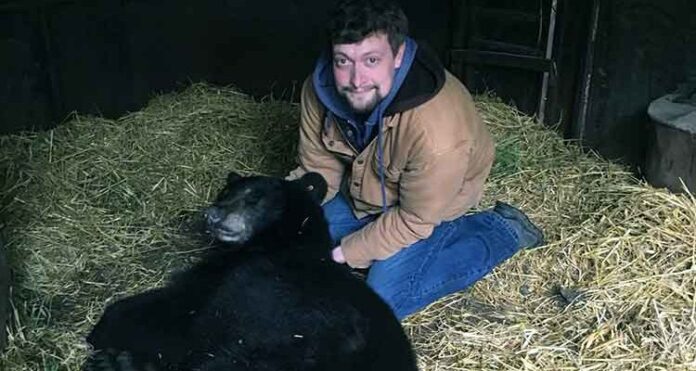 Mark Dallyn’s days of rescuing orphaned bear cubs are over… at least for now.

During the annual Wild for Life benefit for Dallyn’s Healing Haven Wildlife Rescue, held Saturday (Nov. 2) at the Dorintosh Hall, Dallyn addressed the large crowd of supporters on hand, noting the provincial government’s mandate that no longer permits him to rehabilitate bears has had an impact on his operation.

“There’s a whole list of species we’re no longer able to take in including cougars, wolves, lynx and black bears,” Dallyn explained.

Earlier this year, the provincial Ministry of Environment revoked Dallyn’s permit to rehabilitate black bear cubs as part of a new moratorium on permits for large animal rehabilitation. This moratorium, as Dallyn noted, extends to cougars, wolves, lynx and bears, as well as bobcats and wolverines. According to the ministry, efforts will be made to find suitable locations for future orphaned cubs during the moratorium, but Dallyn believes more can be done.

“The Saskatchewan government has refused to consider any of the years of research around releasing bears raised in captivity,” he said. “They have also refused to work with other provinces that do support bear rehabilitation or to work with Dr. John Beecham, the leading man behind bear rehabilitation world-wide. It is a proven fact only three per cent of rehabilitated and released cubs become problem bears. With 11 bears raised and released by Healing Haven Wildlife Rescue in the last nine years, not one has caused the public any issues whatsoever.”

Dallyn went on to say the majority of those bears were tagged and were watched.

“They were never a problem,” he said, adding Healing Haven has even taken extra measures to ensure the well-being of the animals it rehabilitates. “Beginning in June of this year, Healing Haven Wildlife Rescue joined forces with Zoocheck, an organization that monitors zoos and is very supportive of returning orphaned wildlife to their rightful home in the wild,” he said. “We have also joined forces with an incredible lawyer who has donated his time to help get black bears and other species once again rehabilitated in Saskatchewan. He is operating out of Saskatoon.”

The moratorium, meanwhile, is in place as the ministry reviews its captive wildlife regulations and policies, “in an effort to revise and update them accordingly.”

“The ministry has been reviewing its current captive wildlife regulations in an effort to revise and update them,” reiterated Jeanette Pepper, a wildlife ecologist with the provincial Ministry of Environment. “The rehabilitation of large wildlife species, including black bears, requires significant facility space, as well as significant human and financial resources to ensure both the proper rehabilitation of the animal, as well as the safety of the public.”