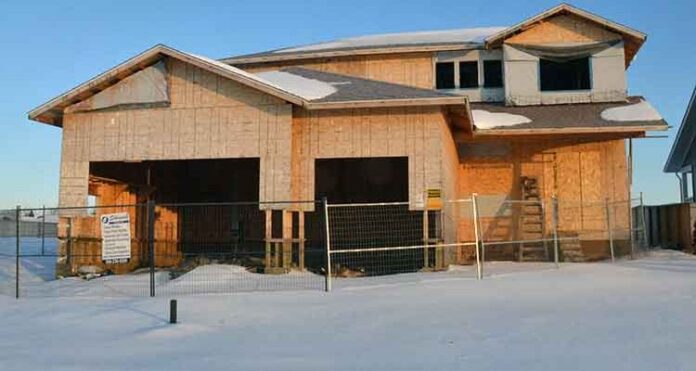 Finish what you started.

That is how Meadow Lake city council or, more specifically, councillor Curtis Paylor feels about an unfinished residential development on Carl Drive, which he says has become a real eyesore for the community as well as a potential safety hazard.

“I’m not sure why it was abandoned, but people get upset when they see it left the way it is,” Paylor said with regard to the unfinished home at 6 Carl Dr. “I don’t recall who the developer is, but a few years ago he started to build two houses side-by-side. They met all the standards and zoning requirements for the area, but only one of the houses was ever finished. Eventually, the abandoned development started to become unsightly and I was approached by residents of the neighbourhood who had some concerns.”

According to city manager Diana Burton, a building permit was issued for 6 Carl Dr. in July 2015.

“All building permits have a normal expiration of two years from date of issuance, but can expire sooner if work is stopped for a period of six months or more due to the increased chances of damage to the building,” Burton explained. “Work on this building stopped in September 2016. In April 2017 an order was issued to stop additional work and remedy the existing building deficiencies. In the city’s view, this order was not complied with and so the city began steps to demolish the building. The owner of the property has brought a court application which was heard in February of 2019 and which both parties are awaiting a decision on.”

Burton could not share details pertaining to the court application nor would she provide the name of the developer.

“Currently the site is fenced as a safety measure to prevent pedestrian access,” she added. “The city is concerned about the delays to the completion of this property and the state of the building, which is why it is being discussed at council (Paylor raised the issue at council’s Jan. 27 meeting). Until a decision is rendered by the court, we are unable to comment further.”

Paylor, meanwhile, said both he and the residents who have approached him are not opposed to construction.

Paylor also said he felt it was his responsibility as an elected official to bring the concerns of residents to the council table, stating that’s why he broached the subject during council’s recent meeting.

“It’s important we do what we can to address the issues,” he said.