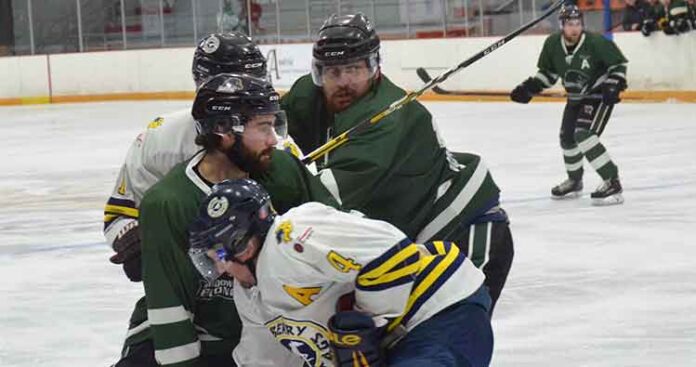 The Meadow Lake Senior Broncos have all the momentum they need to potentially sweep the Dewberry Mustangs in their best-of-five, opening round SaskAlta Hockey League playoff series.

The Broncos have a 2-0 series lead over Dewberry following back-to-back wins at home this past weekend. Saturday night (Feb. 1), in what was Dewberry’s first time ever competing at the Meadow Lake and District Arena, the Broncos sent the crowd home happy by gaining a 4-3 victory over their opponents. The following night (Feb. 2), the Broncos came out on top once again, downing Dewberry by a score of 6-4.

“Both games played out sort of similar,” remarked Broncos head coach Winston Morin. “We were doing really well both nights until we started to take some penalties. This allowed them to start putting more pressure on us, which hurt us a bit. Meadow Lake and Dewberry are also two of the most physical teams in the league, so it was some really good hockey with a hard-hitting style.”

In spite of his team’s success, however, Morin admits it’s going to take everything the team has and more to not only win the series, but to go all the way to what he hopes will be the Broncos’ first SaskAlta League championship. This is why, he added, it’s imperative to maintain a healthy roster of players – both literally and figuratively – throughout the playoff run.

“We’ve already experienced some ups and downs with respect to this,” Morin noted. “In the second shift of our first game in the series, we lost Jordan Oystrick – one of our top defencemen – to a broken finger. I believe he’s going to be out at least two weeks. Meanwhile, the flu bug also hit one of our other defencemen between games, while a lot of the other guys aren’t always available for games or often get to the rink just in time because of their various work schedules. This can affect the team’s chemistry a little bit, but luckily we have what I like to call a Swiss army knife of hockey players meaning most of our guys can step into a different role quite easily and help cover any areas where we may be lacking.”

Two players in particular Morin said fit this description are Logan Pethick and Drake Teer, while a third – who proved himself on the weekend – was team captain Taylor Arnold who was willing to suit up as a backup goalie Saturday if necessary and who played his first game Sunday as a forward after suffering a major shoulder injury in early December.

“I was a little skeptical at first in terms of how I would do because I was returning after such a long time off and I thought my conditioning might not be as good as it could be,” Arnold said. “I was going to play limited minutes at first, but it turned out my conditioning wasn’t too bad and I was more ahead of my injury than I thought at first too. It was great to be back on the ice.”

Morin praised the community for its continued support, noting the popularity of league playoffs combined with the familiarity Meadow Lake fans have with some of the players on the Dewberry roster resulted in huge crowds both Saturday and Sunday.

The Meadow Lake-Dewberry series resumes this Friday (Feb. 7) in Dewberry. If victorious, the Broncos will advance to the next round. However, if they lose, Game 4 will also take place in Dewberry this Saturday, while Game 5 (if necessary) would be played back in Meadow Lake Sunday starting at 5 p.m.

“We need to play simpler hockey when we’re in Dewberry and make sure we keep the puck deep,” Arnold added. “We ran into a lot of penalty trouble on the weekend, so we also need to be more disciplined to be successful.”