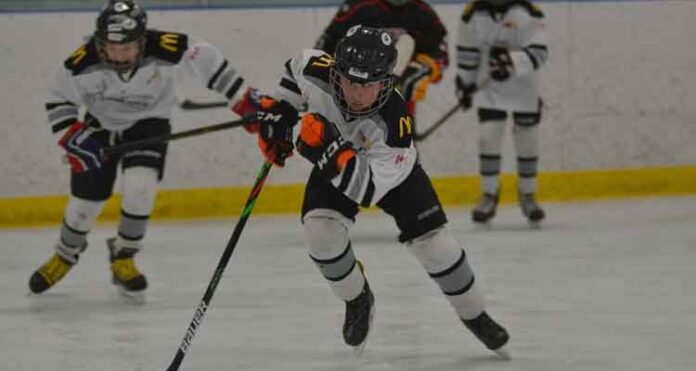 When 10-year-old Seth Fisher of Meadow Lake attends hockey camp in Toronto this summer it will not only be a learning experience for him, but for his whole family.

Fisher, a member of the Meadow Lake Atom Wild, has been invited to take part in this year’s DSkate Hockey Program, which takes place in Ontario’s capital July 27-31. Designed to improve quality of life for hockey players with type 1 diabetes, the program focuses on helping players and parents recognize the value of nutrition and exercise and the harmony that can be achieved through proper balance. Through a combination of elite coaches and staff members independently focused on hockey and diabetes, Dskate’s mandate is to make everyone a part of the action while leaving no one out. Accompanying Fisher to Toronto will be his parents, Tanya and Ross.

“Seth was diagnosed with type 1 diabetes in July 2017 and, at that time, the doctors – as soon as they found out he plays hockey – told us there are lots of options available for kids with diabetes,” Tanya Fisher explained. “The DSkate program has been on our radar for a while, but it can be expensive to attend hockey school, as well as to spend a week in Toronto. We had to wait until the timing worked for us.”

Ross Fisher said he’s looking forward to the camp as much as his son is.

“I’m excited for all of us to go and for us to learn about how to properly feed our son,” he noted. “Type 1 diabetes poses some real challenges when it comes to trying to keep Seth’s blood sugar under control, and being as active as he is (on the ice) definitely causes some more dramatic swings. We’re continually having to adjust the amount of insulin we give him, so I’m hoping this will help give us some clarity. I believe it will help all our mindsets.”

During games, Seth Fisher has his blood sugar levels checked between periods and his coaches know what to watch for in case his levels are running too high or too low.

“He also knows quite a bit himself,” stated Atom Wild coach Jace Andersen. “When he comes off the ice, he tells us if he’s low or not and we have a scanner we use to check his blood sugar level. Personally, I don’t know a lot about diabetes, but he knows his body, what he needs and when he needs it.”

Andersen also described the DSkate Program as a tremendous opportunity.

“A camp like this will be an amazing experience, not only for Seth but also for his parents,” he said.

In addition to the focus on diabetes management, the camp itself will feature all the top, on-ice training athletes attending a hockey program come to expect. With attention to detail, as well as professional and Olympic-experienced coaches ready to guide them, participants will receive an array of on-ice education focused on such areas as player assessment, skating, stickhandling and more.

There could also be an opportunity to meet Max Domi, a member of the NHL’s Montreal Canadiens. Domi, who was diagnosed with type 1 diabetes at age 12, serves as a role model for young athletes with diabetes who aspire to make it to the top in their favourite sport.

“When we first heard about DSkate, we were under the impression Max Domi would be leading the camp,” Tanya Fisher said. “It turns out that’s not the case, but the program does feature some special guests. My assumption is Max won’t be leading the camp, but he will make an appearance.”

Ross Fisher said this will be a highlight for his son because, like Domi as well as NHL legend Bobby Clarke who also has type 1 diabetes, Seth Fisher’s jersey number is 16.

“It was strictly a coincidence, but he’d like to keep this number going forward,” Ross Fisher said. “Seth is part of a spring hockey team this year and he’s already asked if he can be number 16 on that team too… it’s his number of choice now.”

Tanya Fisher, meanwhile, said the biggest opportunity to come from the program will be her son’s chance to participate not only in a sport he loves, but to experience it with other kids who have been diagnosed with type 1 diabetes.

“Seth attends the King’s Hockey School every summer, so this is an opportunity for him to still be part of a hockey program, but this time it will be one more directly suited to his needs,” she said. “When he was first diagnosed, it became a learning curve for all of us. Until we could get a handle on it, we were afraid to travel far from home or to even take him to a restaurant because of the different levels of carbohydrates he might be receiving in his food. At first we let it control us, but later we chose to take control of it, and this (hockey camp) is just another step in that process.”

This was reiterated by Seth Fisher himself.

“I’m looking forward to learning how to better manage my blood,” he said. “I’m also excited to meet other kids who have diabetes and play hockey. And, when we are there, I really want to see the Hockey Hall of Fame.”