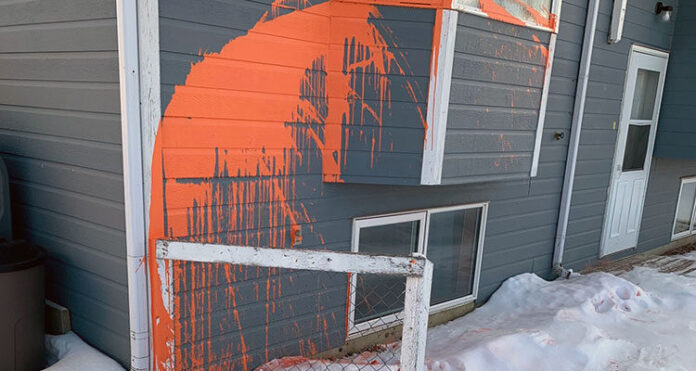 Ashraful Alam believes there needs to be a stronger police presence in Buffalo Narrows.

Alam, who serves as chief administrative officer (CAO) for the northern village, expressed his concerns about a need for more action by the RCMP when his vehicle and home were targeted by vandals. The crime was committed last Thursday night (Feb. 27) while Alam was inside his home.

“I heard a noise outside that woke me up,” Alam told Northern Pride. “My brand new white vehicle was covered in orange paint and so was the front of my home.”

This was around 10 p.m. and, while he does not know who is responsible for the crime, Alam doesn’t believe it was a random act of vandalism. He believes he was targeted because of his position as CAO and the fact the municipality has been cracking down on residents with outstanding property tax bills.

“I believe there are some people who don’t like the way things are going with the village,” Alam said. “People don’t like some of the changes we’ve been making, some of which have never been done before such as putting tax liens against some property owners who haven’t paid their property taxes in a number of years.”

Last spring, the village published a lengthy list of properties in arrears at the time, noting the outstanding taxes needed to be paid by June of 2019 to avoid the aforementioned tax lien. Notices regarding such liens, he added, have recently been issued to property owners still in arrears.

Meanwhile, Alam reported the vandalism to the RCMP, but said he is far from pleased with the response he received.

“The RCMP presence in Buffalo Narrows is very poor,” he said. “When I reported what happened, they told me there was nothing they could do about it, which is really sad.”

He also said it’s sad people feel the need to resort to criminal activity such as vandalism in order to get their message across.

“My main concern, however, is with the RCMP,” he continued. “This is a small community. I’m sure they know which people are doing what.”

As a result, Alam said he plans to write a letter to the RCMP, formally asking for more patrols in different parts of the community and at different times.

“More awareness needs to be raised about what is going on here,” he said. “It was me today and it could be someone else tomorrow.”

According to Cpl. Rob King of the RCMP’s media relations department in Regina, however, the level of vandalism reported in Buffalo Narrows is no different that most other communities in the North.

“All regular police work is being done in Buffalo Narrows to full capacity by the members who are there,” King explained. “I’m not sure what more can be done.”

King went on to confirm the incident of vandalism was reported to the local detachment and members did attend.

“The poor guy did get hit hard,” King said about the level of vandalism. “This matter is definitely under investigation, but right now there’s 1,200 suspects. It could be anyone. I understand he (Alam) is frustrated and I would be too if my white car was now orange, but as the village administrator he could end up making things even worse if he brings more publicity to himself. But, that’s his decision.”