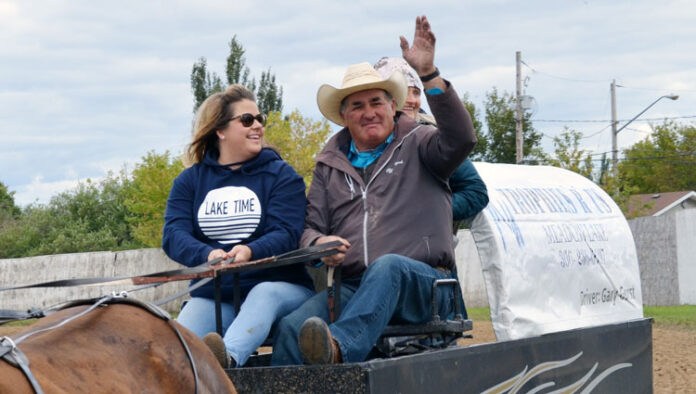 According to Meadow Lake’s Gary Gorst, he couldn’t have asked for a better way to close the book on his chuckwagon racing career.

The final stop on this summer’s Chuckwagon Charity Fun Run tour – held Saturday and Sunday (Sept. 5 and 6) at the Meadow Lake Stampede Grounds – also served as Gorst’s farewell weekend, as he officially retired from the sport following Sunday’s final that saw him cross the finish line ahead of his sons and fellow drivers, Logan and Dustin Gorst.

“It was a dream come true,” Gorst told Northern Pride. “To race in front of a hometown crowd in the final heat against my sons was a great way to not only cap off a great weekend, but also a great career. It was tough emotionally, but the support shown by everyone was unbelievable.”

Gorst began his career in 1969 as an outrider for his father, Art. He started driving in 1970 and, in the five decades since, earned numerous accolades including a Canadian Professional Chuckwagon Association (CPCA) championship in 2010, as well as the CPCA High Point Driver Award in 2008, 2010 and 2011. His barn has also earned several Calgary Stampede Equine Outfit of Excellence Awards, and Gorst also won 13 CPCA show championships in a five-year stretch.

In recent years, Gorst competed in the World Professional Chuckwagon Association (WPCA) and was scheduled to complete his career with that group until the COVID-19 pandemic put a stop to both this year’s WPCA and CPCA seasons.

“I was glad I could be part of some stops on this summer’s (unsanctioned) Fun Run tour,” Gorst continued. “It turned out to be a really good year.”

As noted, Gorst is a second generation wagon man whose father competed at the Calgary Stampede in the late 1970s and early 1980s. Along with his wife, Janice, Gorst has three children, Logan, Dustin and daughter, Jenalee. Gorst said he is proud to have been able to carry on his father’s legacy and is equally as proud to know his sons, as well as members of his extended family, have been and continue to be involved in chuckwagon racing as well.

“My sister, May, is still involved (as official starter during the Fun Run), but she started as an outrider and was actually the first female outrider at the Calgary Stampede,” Gorst noted. “My entire family has been a part of things one way or another over the years – it’s been a really good way for us to all come together, and I am glad so many of them were at the races on the weekend – it’s quite the family deal. I’m retired now but things just keep rolling on for our family.”

Gorst also said he plans to still be involved in the sport one way or another, most likely as a spectator and as a fan, however, as he cheers on his sons.

“I’ve had a lot of great sponsors during my career and have met a lot of great people,” he stated. “I thank all my followers. I may have had both good days and bad days throughout my racing career, but the support has always been there.”

Meanwhile, as for this past weekend’s races themselves, the show winner was Obrey Motowylo of Bluffton, AB.

“We wrapped up the Fun Run yesterday (Sunday) here in Meadow Lake,” noted driver and event organizer DJ King. “I would like to thank everyone who did their part to make the last six weeks run as smooth as they did. It takes a big family to put on events like these … So, I thank all the drivers who came out to support the cause, all the great communities for hosting us and all the awesome sponsors that helped out, and all the awesome volunteers.”

Motowylo donated his winnings from the show to the Flying Dust Youth and Disabled Wish Foundation.

“We also were able to have a great send off to such a well respected man and his family,” King added. “Gary Gorst… you deserved the send off.”