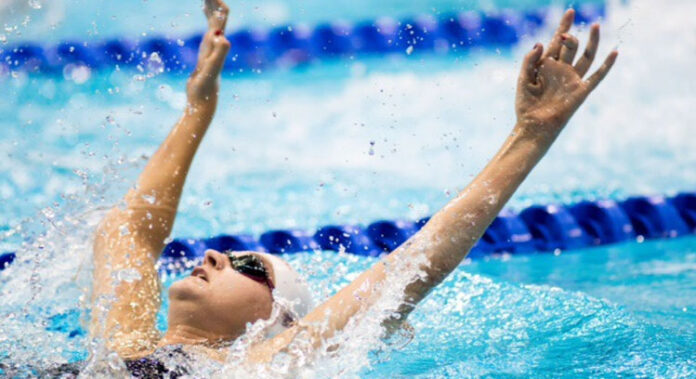 From tragedy can come triumph.

Former Meadow Lake resident Nikita Ens is an example of this, as seven years after a motor vehicle collision changed her life forever she will now proudly take her place as a member of Team Canada at this year’s Paralympic Games in Tokyo, Japan.
Ens, who now resides in Saskatoon, was one of seven swimmers recently named to Team Canada based on their results from the World Para Swimming Championships held in London in 2019.

“I am so thrilled and honoured to be selected for a spot on Team Canada for the Paralympics,” Ens told Northern Pride.

Following the cancellation of the Paralympic Swimming Trials, which were scheduled for last May in Toronto, Swimming Canada’s para swimming selection committee decided on the new criteria it would consider when deciding who would compete at the Paralympics. The Tokyo event was supposed to take place last summer, but was also cancelled because of the COVID-19 pandemic.

“It was within grasp,” Ens said with regard to her chances of qualifying last year. “The original plan was to hold the Canadian Paralympic Swimming Trials in Toronto at the end of May 2020. It would depend on your time there, but they were going to select the team based on the results of that event.”

Immediately before the pandemic was declared, Ens, her teammate, Shelby Newkirk, and coach, Eric Kramer travelled to California for warm-weather training.

“Maybe a week or so after we got back, everything was shut down because of COVID,” Ens added. “We took a hiatus from swimming because the pools were all closed for several months. Thankfully, in Saskatchewan, we were able to begin outdoor training in the summer… our coach had to bear quite the burden because of the various policies and protocols, but he and (my team) the Saskatoon Lasers have crushed it. I am very thankful for how they have organized their system to allow as many people to train as possible.”

“In a testament to their most recent international performances, as well as the ongoing commitment, dedication, patience and professionalism in the most trying of times each of these swimmers and their coaches have demonstrated, nominating the swimmers to the 2020 Paralympic Games Team is a critical piece of certainty in a very uncertain time,” noted Wayne Lomas, associate high performance director and para swimming national coach.

Meanwhile, Ens said she anticipates continued training leading up to the Paralympic Games.

“I really look forward to working more with my awesome team,” she said. “I have physiotherapists, nutritionists, sports psychologists – I will be working with all those branches of the team. There is also a competition in Berlin, Germany in June, and immediately before the Paralympic Games, Team Canada will be training in Japan.”

The Games themselves will, of course, be somewhat different than usual this year because of the various pandemic guidelines that will be in place.

“I’m expecting personal bests,” Ens said. “With the COVID situation it’s difficult to gauge how other international competitors are doing, so I definitely hope to set personal bests in both events, but a medal would be pretty neat as well.”

Ens, the daughter of Meadow Lake’s Rod and Monica Ens, earned a provincial track and field championship for Carpenter High School in 2006 in the senior girls shot put event. She was also a regular swimmer and served as a lifeguard at the Meadow Lake Aquatic Centre before a motor vehicle collision just outside Meadow Lake on Highway 304 in February 2014 left her confined to a wheelchair.

“A big thank you for all the support in Meadow Lake, and to my friends, family and coaches as well,” Ens concluded.