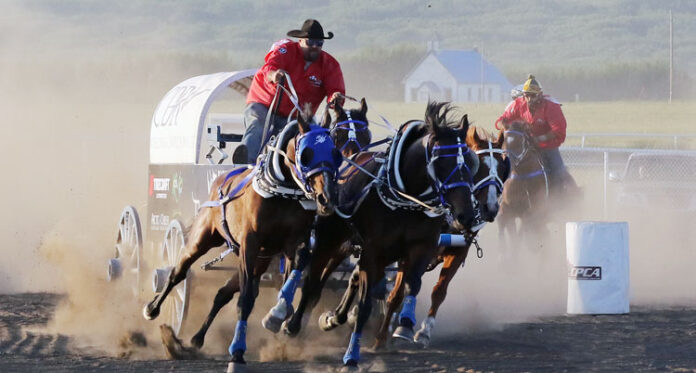 The Canadian Professional Chuckwagon Association is back.

“My horses all ran well, and it’s great to be finally going again,” Carey told Northern Pride. “When you have these horses just sitting in the pasture, well, it’s not what they’re bred to do and it’s not what we want them to do. They’re bred to run, and it showed on the weekend. Everybody did their work and were ready to go.”

“There are lots of good outfits, and it’s going to be a battle all year,” Carey said with regard to the rest of the season. “As long as we can keep the horses healthy, that’s the goal and the end all be all come the end of the year.”

Day 4, meanwhile, saw the top drivers compete in a dash for cash. Carey’s outfit was second in the dash with a time 1:16.06. The big winner of the dash, meanwhile, was 2019 Calgary Stampede champion and Meadow Lake driver Logan Gorst, who clocked in at 1:15.06. He also garnered the most points (175) over the four days.

Gorst was also second overall in the aggregate, followed by Ryan Baptiste of Cando, SK, Danny Ringuette of Bonnyville, AB and Carey’s second outfit, which finished in fifth place.

Next up, the CPCA will be in Onion Lake June 30 to July 4, followed by the North American Chuckwagon Championships, a new event scheduled for July 11 to 19 designed in part to replace the Calgary Stampede which is not featuring chuckwagon races this summer.

“At Onion Lake and going forward throughout the season, I am hoping for the same outcome as Poundmaker,” Carey said. “I want to go there and win, but so too do 35 other guys. I want to win just like everyone else, and – when you’re a competitor – you need to go in thinking you’re going to win every time. That’s my goal and, like I said, for 35 other guys, it’s their goal too.”