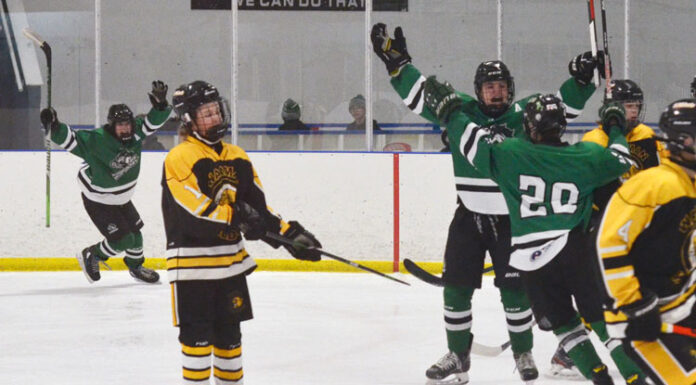 Things continue to look up for two Meadow Lake hockey teams in their respective quests for provincial gold.

This past Saturday (Feb. 26), the crowd at PineRidge Ford Place on Flying Dust First Nation became electric when the U15 Meadow Lake Stampeders won back-to-back games over Warman to advance to the provincial ‘A’ semi-finals. Saturday’s success came following a 3-0 loss in Game 1 played in Warman Feb. 12.

Beck knew the game could not end in a tie.

With less than two minutes left in the game, the Stamps pulled their goalie and, with just over a minute left, they scored to go up 3-2. The Meadow Lake team potted another with only few seconds left to win the game 4-2. With the series now tied at one game apiece, the modified best-of-three series saw the two teams take to the ice again following a short rest period for a 10-minute mini game.

“We were riding on the momentum and scored pretty early, and even though we took a fair amount of penalties in that 10 minutes we were able to kill them off and score an empty netter with just over a minute left to win 2-0,” Beck said. “Now we’re heading to the North final, which is essentially the provincial semi-final, where we will face the team from Martensville.”

While Beck was uncertain as to what day the team will be on the road, the U15 Stamps are scheduled to be back at Flying Dust March 13 at 4 p.m.

Meanwhile, the U18 Stampeders have also advanced to the provincial ‘B’ semi-finals and will now play Dinsmore.

“We’ve been playing good hockey all around,” remarked U18 assistant coach Shane Nolin.

The U18 Stamps defeated Kindersley in the third round of provincials, eliminating their opponents this past Sunday (Feb. 27) at PineRidge Ford Place.

“In Game 1, we were up 4-2, had a little bit of bad luck and it ended up tied 4-4,” Nolin said. “We knew we had to come home and win again anyway, so we were happy with a tie. Sunday’s game was close until the third period and then we blew it open.”

Nolin also said all three lines contributed, something he hopes continues when the team meets Dinsmore in the semi-finals.

“We have never seen this team before – we haven’t played these guys, but they are first in their league,” he said. “This is the fourth round coming up, so any opposition we get will be strong and will be a good test for us. We have been playing good hockey lately and, again, all three lines are contributing, along with strong goaltending, so we have just as good a chance as anybody. We’re just happy to have things going this well… For some of these players they’re in the last year of Midget. It’s great to even just have a deep provincial run in your last year of Midget.”