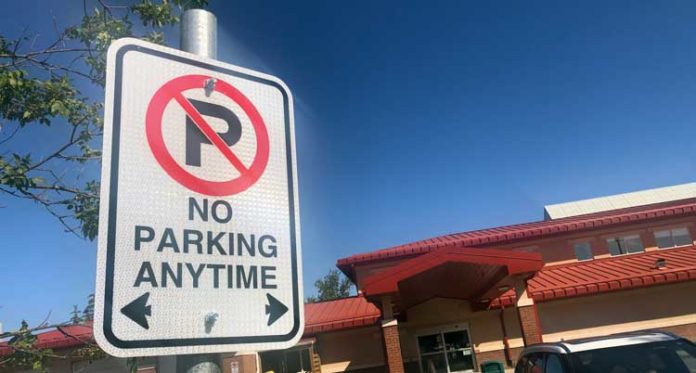 Councillor Marty Bishop is calling for city administration to do its homework when it comes to determining whether or not a ‘no parking at any time’ zone near the Meadow Lake Hospital is truly necessary.

During city council’s regular meeting July 25, Bishop brought forward a notice of motion asking administration to return a full report and recommendations for council with research and assessment on a series of options regarding the 2016 traffic bylaw amendment which restricts parking on the north side of 8th Avenue West between 3rd Street West and Centre Street.

“These include, listed in order of preferred outcome, an amendment that changes this section to the same restriction as the Centre Street to 3rd Street East portion of 8th Avenue which is no parking between 8:30 a.m. and 5 p.m. on school days, but only on the block where the school – or, in this case, the hospital – is,” Bishop stated. “Another option is an amendment that keeps this whole section as no parking but only between the hours of 8 a.m. and 6 p.m. We could also repeal the 2016 amendment, let it revert to allow parking and remove the signs, or, we could leave it as is.”

Because notice of Bishop’s motion was given for the first time at the July 25 meeting, the issue at hand would normally wait until council’s next meeting for discussion and approval. However, council voted unanimously to allow Bishop to officially bring his motion forward that night. The motion was seconded by councillor Tom Harrison, who agreed administration should do the necessary research as requested.
“Once that’s done, we can move forward from there,” he said.

The ‘no parking’ issue recently came to the council table when councillor Mauri Young brought it forward June 13. At the time, she questioned why ‘no parking’ signs were suddenly in place along the north side of 8th Avenue outside the hospital. According to city clerk Ferne Hebig, in 2016 an amendment was made to the city’s traffic bylaw to make that side of the street ‘no parking’. The amendment, which was approved in August 2016 takes into account the north side of 8th Avenue from 3rd Street West to Centre Street.

However, signs restricting parking were never put in place until six years later when, earlier this year, they were finally ordered and subsequently erected before nearby residents could be notified of the change.

“I have had several calls from various people wondering why this section of street had to be made ‘no parking at any time,’” Bishop noted as part of his rationale for bringing forward his motion. “It was mentioned it was partially due to the ambulance (needing room when exiting the adjacent ambulance bay), so I took it upon myself to contact the ambulance coordinator and they said they have no issues with people parking there as long as it’s not around the driveway in and out of the hospital. They need a clear route in and out of that driveway, but the rest of the avenue is fine.”

Bishop’s main concern, however, is the fact the decision to introduce the ‘no parking’ rule was made in 2016 and only acted upon in 2022.

“No one put up signs (in 2016), so parking never changed,” he said.” People have been continuing to park there for six years. No one ever noticed the signs were missing or people were parking where they shouldn’t be. The EMS issued no complaints during this time to the city of parking being an issue. No one noticed for almost six years, so how necessary can this amendment really be?”

Meanwhile, mayor Merlin Seymour wondered if hospital employees who often park along the road in question raised concerns about the new signs.

“No, but people who own property nearby are concerned,” Bishop replied. “If they were to hold a function and they need overflow parking beyond their yard or driveway, they wouldn’t be able to park on the street.”