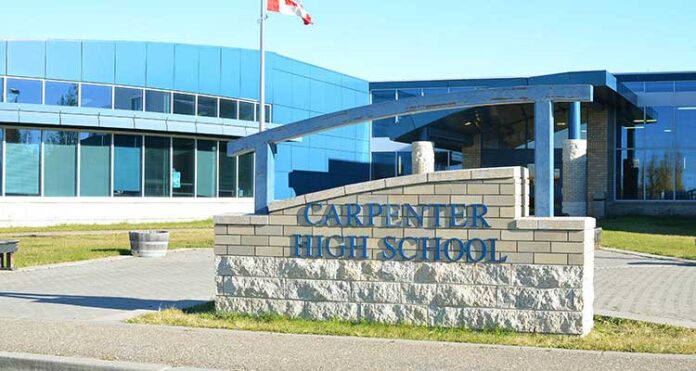 The saying one bad apple spoils the whole bunch is a lesson Grade 12 students at Carpenter High School have come to learn the hard way.

Recently, this year’s graduating class was informed of an upcoming change to the traditional grad program. More specifically, they were told there will no longer be an evening ceremony held on the last day of school.

“How they dropped it on us was quick and unexpected,” remarked CHS Grade 12 student Alyssa Timmer. “But, I understand where the teachers are coming from.”

While an afternoon ceremony – with graduates dressed in caps and gowns to receive their scholarships and diplomas – will still take place, CHS grad advisor Judy Waites said there are several reasons behind the school’s decision to axe the evening program.

“First and foremost is staff abuse,” Waites noted. “It’s been on the increase in recent years. There’s been verbal abuse for sure, but also an incident last year involving the butt-grabbing of one of our teachers. These kinds of things should not happen in a school setting.”

Waites went on to say, as an extracurricular school activity, there’s no tolerance for alcohol at the grad, a rule some participants failed to adhere to.

“In any other school setting, the consequence for this would be a suspension, but this being the last day of school we have no recourse,” she said. “Nature being what it is, people have taken advantage of this in the past. I’m not painting everyone with the same brush because not everyone is responsible for behaving this way, but CHS staff members are not comfortable being at an event where people are drinking.”

Grade 12 student Olivia Balisky, meanwhile, is disappointed her entire graduating class is being made to pay for the actions of others.
“We’ve been together for 13 years and we need to celebrate that,” Balisky said.

As a compromise, CHS has opted to hold another event in May.

“We’re calling it a prom and the students will still be able to invite guests,” Waites said. “Holding it in May, however, gives us more teeth. It will be a formal event open to all Grade 12s, but if anything happens that is against the rules we will have recourse. We will be able to turn people away at the door without it messing up our graduation lineup, and we’ll be able to hand out suspensions the next day.”

Timmer is optimistic the new event will be well received by her fellow graduates.

“We all need to work together to make good things happen,” she remarked. “Change doesn’t always have to be a bad thing.”

The change to the CHS grad program mirrors a recent decision made by the Regina School Division. Their grad banquets, typically comprised of a dinner and dance, have been called off this year as a way of addressing equality concerns amongst students. Many students spend hundreds of dollars on dresses and suits and, according to the Regina School Board, the price to put on these events has ballooned.

“It is similar to what’s happened at CHS, but our schools make their own decisions as far as grads go,” noted NWSD director of education Duane Hauk. “We support whatever their decisions may be.”

Waites, meanwhile, said equality was another issue taken into account when CHS decided to cancel its evening ceremony at the end of June.

“As a mother, I know how expensive it can be with the dresses, the hair and the nails,” she said. “We have a very mixed socio-economic base in our school and many families cannot afford these things.”