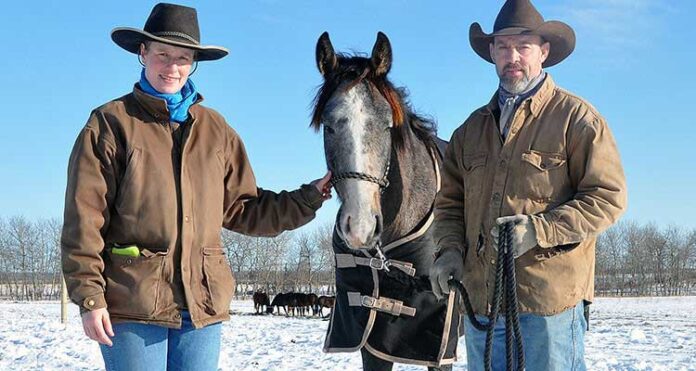 If anything, it was a moral victory.

That’s how Meadow Lake area resident Renée Marshall feels about the verdict rendered by a local judge at the conclusion of a negligence suit she filed last year against her neighbours, Mike and Shelley Rediron.

“I found the judge to have ruled as fairly and as rationally as any person could have,” Marshall said. “He took a great interest in what happened, really paid attention and asked a lot of questions. I knew I would agree with whatever decision he reached.”

One year ago, Marshall’s husband, Dale Danilkewich, was forced to shoot Chrome, one of Marshall’s favourite horses, after it broke its leg as a result of trying to outrun a pack of stray dogs that ventured onto the couple’s property southeast of Meadow Lake. Through their own investigative efforts, Marshall and Danilkewich concluded the dogs belonged to the Redirons and, in turn, they sought restitution for their loss.

“In the end, I did end up taking them to court because nothing was forthcoming,” Marshall said. “They were unwilling to admit or agree it was their dogs. They just kept saying we couldn’t prove it.”

Judge Miguel Martinez, however, ruled Marshall was owed the full amount to replace the horse including court and vet fees for a total of $7,400.

“As it turned out, he (Martinez) was convinced we had enough evidence,” Marshall continued. “We had gone around the neighbourhood looking and, I guess, we had enough reputable witnesses who had seen these same dogs before. In the judge’s opinion, when people are away for an extended period of time – even if they live in the country – they need to keep their dogs restrained in some fashion. It’s just common sense. It’s in a dogs nature to wander – I don’t blame the dogs at all.”

According to RM of Meadow Lake administrator Gina Bernier, the municipality does not have a bylaw in place to deal with dogs running at large.

“A lot of people, myself included, have puppies that run,” Bernier said. “When living out in the country, how are people going to keep their animals under wraps? You don’t want to tie them up because that’s hardly fair.”

Bernier also said, if her dogs were trespassing on a neighbour’s property, she’d expect her neighbour to handle it if it was a problem.

“Call me the first time, but if it happens again they can deal with it,” she said. “The RM has no enforcement officer and, even if we did, it’s too big of an area to have someone running around finding dogs.”

Marshall said the dogs in question were spotted on and near her property for about a month after the initial incident. Since then, they have not been seen.

“I think they finally decided to tie them up,” she noted.

The Redirons have until Feb. 26 to appeal the decision. Meanwhile, Marshall said, because the matter was settled in small claims court, she’s not guaranteed a cheque for $7,400 to simply go out and buy a new horse.

First, she said, she has to attempt to fetch the money from the Redirons.

“It could take a while before I see the money, but this wasn’t about that – this was something I had to do,” she said.

Martinez said the common method in small claims rulings is to collect the money yourself.

“There’s no collection mechanism under small claims legislation,” Martinez said. “If the person has not paid you by the end of the appeal period, you have to register at the next level of court – Court of Queen’s Bench – which then gives you that collection mechanism.”

This, he added, could include wage garnishment or property liens.

Meanwhile, Mike Rediron was contacted, but chose not to comment at this time. However, a benefit dance has been organized by the Redirons’ friends and supporters to help them cover costs associated with the recent ruling. The event will take place Feb. 26 at the Meadow Lake Civic Centre.