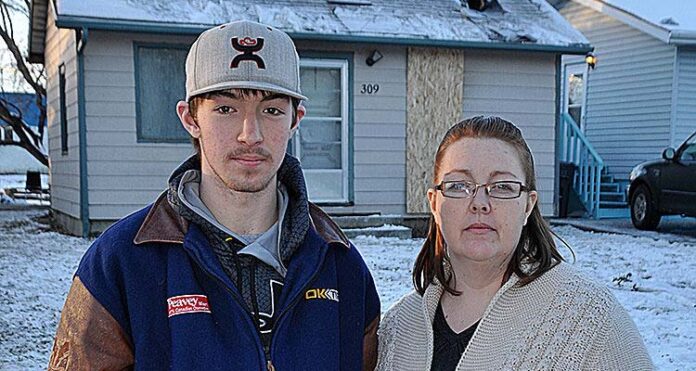 After her home on 8th Street East was ravaged by fire New Year’s Day, things started to turn around for Lumgair and her teenage son, Arlan. The community banded together to help them both emotionally and financially, they temporarily moved into a new house and plans were finally underway to rebuild their original. Then, things took a turn for the worse.

“On Sunday (April 10), I got a phone call from a lady saying she’d found my son’s cell phone and was calling in an effort to locate its owner,” Lumgair said. “I was confused at first because Arlan still had his phone. Later, I realized the phone she was calling about was an old cell phone he’d dropped in the water at one time, and which he’d left in our old house.”

That’s when the Lumgairs decided to pay a visit to their home, which is still standing but currently unlivable because of both fire and smoke damage.

“There were a lot of tracks in the fresh snow – you could tell someone had been coming and going,” Lumgair continued. “As it turns out, they’d broken out one of the back windows and had been taking stuff from the house. A lot of stuff was scattered about the backyard.”

Once inside, she discovered much of what remained in the home had been trashed.

“Yes, part of the house did burn, but other than being smokey, the rest was not wrecked by any means,” she said. “Whoever was in the house really did a number. Cupboard doors were ripped off, there were broken dishes everywhere, the place was just destroyed.”

From there, Arlan Lumgair decided to check the garage. That’s when he discovered tools, as well as bicycles belonging to him and his mother, had been stolen.

“I’m more upset about this whole situation than I was about the fire,” Shawna Lumgair added. “The fire was not intentional – it was just something that happened. These people purposely went into the house even though it had been boarded up and did nothing but just wreck and steal things. Now the bikes are just something else we’ll have to replace. It’s a total lack of respect.”

According to RCMP Cpl. Ryan How, the break-in is still under investigation, adding there isn’t much the police can report about the incident as of yet.

“But, we may have a lead on where some of the stolen property went,” How said.