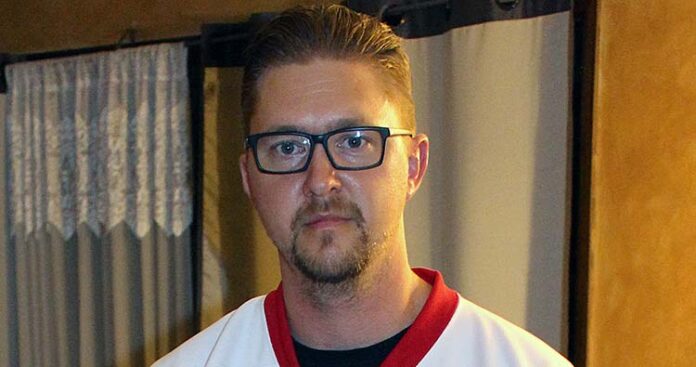 As the new president of the Meadow Lake Kinsmen Club, Joey Alkestrup wants to ensure the success of the organization continues. Recently, he spoke with Northern Pride about his new role, the Fall Leadership Convention and growing up in the country.

Q: How long have you been with the Meadow Lake Kinsmen Club?
A: This will be my fourth year. Former president Evan Haubrich was involved before I was and he was the youngest in the club, and he wanted younger guys to join. He said it would be fun and he was right.

Q: What have been some club projects the last few years?
A: We always do Telemiracle every year and we’ve done several sports dinners now. We used to do an ice fishing derby, but it was cancelled during the first year I was involved. We’re looking at bringing it back because it’s one quite a few members are interested in doing again. We want to do it in a way to attract people, so they can learn what the Kinsmen are all about.

Q: How did you become president?
A: I didn’t really want to take it on, but when you’re voted in by your peers, sometimes you have to give in. They wanted me to be president. My role now is to basically sit back and let everyone else make decisions. If there’s ever a tie, I get to break the tie with my vote, otherwise I don’t get to vote on anything. I chair the meetings and give everyone the headlines like where we are now and our agenda. I’ll break it down and keep the floor open for discussions.

Q: What was it like with Haubrich as president?
A: It would have been no different if there was someone else there. We follow an agenda and we try to brainstorm ideas and be creative. It keeps us out of a lull. Everything the Kinsmen does is a group effort. Without the other members, my job would be a lot harder. But, everyone is active and wants to show up and contribute. We’re fortunate as a Kinsmen club and as a community to have groups like the Kinsmen and Kinettes.

Q: Tell me about the Kinsmen gathering last weekend.
A: We call it the Fall Leadership Convention. It’s held every year, but not usually in Meadow Lake. It was our zone’s turn to host. We were nominated and we let our name stand. We knew it was going to be a challenge, but we accepted it. Everyone seemed to have a lot of fun.

Q: What happened during the convention?
A: In the morning, roll call started at 8:15 a.m. so anyone who said he or she was going to show up were there. Most of the morning is the provincial meeting, which goes over how much money the club has in Saskatchewan and how much Telemiracle gave out so far this year. The meeting also goes over what everyone in the province is doing. In the afternoon, there were seminars, group activities and a presentation about how to make fundraising more fun. They also did a social networking seminar about how to use social networking to our advantage and safety. It’s the new media and the quickest way top get the word out.

Q: How many people attended?
A: We had 125 registered to come to Meadow Lake. I don’t know if they all showed up, but at one point, the count was at 107. People came from Saskatoon, Regina, Lloydminster, Yorkton and a lot of small places in between.

Q: What comments did you hear from those people about Meadow Lake?
A: They were surprised by how much snow we had. I kind of laughed and said it’s nothing like how it was on Monday (Oct. 17) – it’s about half. For the most part, people said they didn’t expect much in Meadow Lake and expected things to be small, but they couldn’t believe how hospitable Meadow Lake is – people were welcoming.

Q: What’s special about the club?
A: I don’t know if Kinsmen makes Meadow Lake special or if Meadow Lake makes our Kinsmen group special because the support we get every year when we do Telemiracle is phenomenal. For a small community to raise $50,000 is great in comparison to a larger centre that can’t make even half of that.

Q: Where were you born?
A: I was born and raised in Meadow Lake. My parents have a farm about 10 miles west of Meadow Lake and that’s where I grew up. They’re ranchers with mostly cattle, but when I was younger they had a little bit of grain on the side, too, but that’s since been phased out.

Q: What’s it like in the country?
A: It’s peaceful. There are wide open spaces. In some ways I wish I had my kids out in the country, but as it is I’m happy living in town. I work everyday, so I’m in between where my parents live and where I have to work. It’s as good as it can get right now.

Q: What chores did you have growing up?
A: We had to feed the cattle with grain and water them. My mom used to raise dogs, so we had to walk them and feed them. There was quite a bit of help needed with haying and harvesting – it was anything a typical farm kid would do. My parents still have a small herd of cattle and right now it’s a mess. It looks like spring runoff, but I’m sure it will freeze soon and help clean things up.

Q: What are the benefits of being raised on a farm?
A: You learn responsibility really quick. You learn about life because we give life by feeding and taking care of animals. You’re also in touch of where food comes from. I wouldn’t say more in touch than people living in Meadow Lake because it is a smaller community, but if you compare it to a larger centre, you hear a lot of people say food comes from a grocery store. It comes from farmers.

Q: What was Meadow Lake like after high school?
A: I graduated from Carpenter High School in 2001. Carpenter was where Gateway Elementary School is now. I was one of the last graduating classes there before the new high school was built. The school was a lot smaller, but not too small for the number of people there. I think the school would have been too small for the number of kids coming behind us. The schools used to have other grades, but they switched because the other schools were too small. There were a lot of programs and opportunities when I graduated. The football program wasn’t operating, but there was soccer, volleyball, basketball and badminton.

Q: What was your goal after high school?
A: I went to agricultural school at Lakeland in Vermillion, AB, because I wanted to be a rancher, but my eyes were opened quick when I came out of my graduating program and they told me I could make minimum wage working in a feed lot. I didn’t think it was the right career path at the time. I owned cattle when I went to college – I don’t own cattle anymore. Some day, I might get back to raising cattle, but for now I have two sons – Wyatt and Connor – and I’ll worry about raising them instead of getting up and feeding cattle every day.