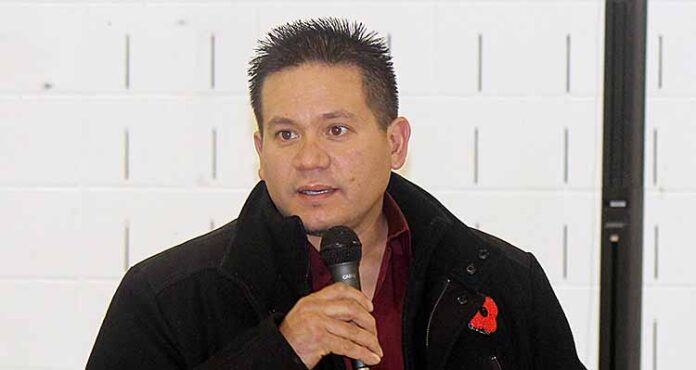 An all-candidates forum – moderated by Joey Tootoosis – took place Nov. 28 on the reserve where those running for one of four spots as councillor had the opportunity to describe their platform and answer questions to various band-related issues. The nine band members running for office include: Judy Bear, Lawrence Bear, Tyson Bear, Connie Derocher, Richard Derocher, Marie Gladue, Mervin Gladue, Oneill Gladue and Jon Mirasty.

Jeremy Norman, a former FDFN councillor, was recently acclaimed as chief and will take office after the Dec. 5 election. Norman addressed the audience before the forum began, announcing his respect for those running and approval of the recently enacted election act.

“I know there’s strength in each one of you whether it be education or recreation and you’re all heroes in my mind for stepping up for your community,” he said. “I’d like to thank our committee that developed our election act. It’s the first election we’ll be governing ourselves.”

Up for re-election are Tyson Bear Richard Derocher and Marie Gladue.

Bear wants to serve a second term on council and stated he’s worked hard in the last two years. He said launching an elders committee would be beneficial for the band to assist with decision making. Bear noted it’s been an honour to serve the reserve’s members so far.

“I tried to help everyone and tried to visit with everyone,” he remarked. “I was all over the community. I can probably do better. You have to have a balance.”

Bear went on to describe his first term as being a learning experience. He’s been involved in housing, economic development and land management, and said he wants to treat all band members equally.

Derocher – who is seeking a seventh term – has centred his campaign on young people, promising to spend $1 million in two years to support them. He said it’s a bold statement, but it’s achievable.

“I know the budgets and I’ve been around enough to know we can spend that kind of money on our youth – we just need to want to do it,” Derocher claimed. “I promise you, if elected, that will happen.”

Derocher went on to say, having a place where elders and young people could gather would be a priority. He said having a place to visit and do activities is important because it allows band members to mingle.

Derocher also stated he kept his promise from the last election about how the 6(2) members would vote in 2016.

Gladue spoke about the importance of maintaining partnerships and seeking more money from the federal government to address mental health and addictions. She added, the band gets some funds from the Meadow Lake Tribal Council, but it’s not enough.

“We battle every year with the issue of drugs,” Gladue stated. “We try everything we can as chief and council. We need your help in that area. We can meet many times with the RCMP, but it’s not going to get us anywhere. We need to start here.”

Gladue – who is seeking a seventh term – added economic development is also important, which can be enhanced through various agreements. She also said working with young people would be a priority.

Judy Bear – who has sat on justice, education and housing committees – believes the band needs leaders who are bold, confident, well spoken and well versed. She wants to maintain Flying Dust’s good reputation and see changes from top to bottom.

“Elections are not a popularity contest and membership should base their vote on what a person can do for the community as a whole – not just what they can do for your family,” she stated. “The community connects us.”

Bear would like to see progress in several areas such as education, housing, roads, youth programming and job creation. She added, she has the knowledge on how programs within the office work and the confidence to be a strong leader.

Lawrence Bear kept his comments short to the public during the forum, briefly stating elders and young people should be consulted.

“Elders should have a committee in place and we should encourage them and tell them what we make decisions on,” he said.

Lawrence Bear is employed with Flying Dust as an electrician and he’s fluent in the Cree language. He wants young people to also have the chance to speak Cree.

Connie Derocher wants to bring positive change to Flying Dust with transparency, inclusion and good communication. She said transparency builds trust, while inclusion involves community building in the ways of collaboration and consultation.

“I am proud and grateful to live in this community, however, I think there is room for us to be better,” she commented. “I believe education is our buffalo and it’s what will provide our future generations with a prosperous and promising future. I see areas of concern and have many questions about our education program that needs to be addressed.”

Derocher noted leadership should be preparing young people to leave the reserve by giving them the training necessary to succeed. She believes issues surrounding training, employment and elders need to be addressed.

If elected, Melvin Gladue wants to improve operations and maintenance, Treaty Day and implement an emergency preparedness plan. He would also like to see an upgraded youth centre and more encouragement for young people to finish school.

“I’m going to be proactive with the elders and take their suggestions to heart,” he stated. “We also need to help our members get certified and have tickets like First Aid, so when job opportunities arise, they’re ready to go.”

Melvin Gladue went on to say, if there’s a large snowfall, a plan needs to be in place to respond. He said roads and driveways need to be upgraded, and the young people need to be taught to live a healthy lifestyle. He said educating young people would be a priority.

Oneill Gladue has worked as a public servant for close to 30 years, which gives him confidence to work with band members. He said the band should pursue economic development along 1st Avenue in Meadow Lake and institute a tax regime to raise funds. He also noted, there are many businesses already established that have merit and should be expanded.

“We need to be working at the band office on these matters,” he remarked. “We need to ensure our youth have support and our elders are safe in their homes.”

Gladue went on to say the band risks falling behind if they don’t act on opportunities soon. He said Flying Dust can enjoy success like other Saskatchewan First Nations.

Finally, Jon Mirasty – a former professional hockey player – wants to see more enforcement on the reserve. He said, the band needs to create programs for members with addictions and banish those who don’t abide by the law.

“Drugs are a huge problem on our reserve and I don’t think anyone takes it that seriously,” Mirasty stated. “For me, I know Makwa (Sahgaiehcan) came down pretty strict and that’s a great idea. I want to be like that, that’s awesome.”

He also said he has the skills to create jobs and pointed at the Tim Hortons as proof. While he has since left the company, he noted it’s still an option for local employment. Mirasty added, elders should also be involved in economic and development decisions.