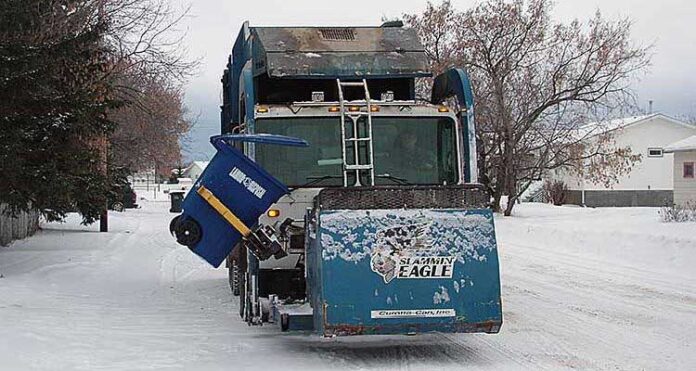 The City of Meadow Lake is ready to clean up its waste collection bylaw.

During the regular meeting of city council held Nov. 28, first reading was given to a waste collection amendment bylaw that, once fully approved, will see three key changes incorporated into the current legislation.

“Right now, the bylaw states garbage and recycling bins cannot be stored in front yards,” explained city manager Diana Burton. “However, a large portion of the community does store them in their front yards and we don’t enforce it. If we’re not going to enforce it, why include the provision in the bylaw?”

The waste collection program began in Meadow Lake in 1997 and, as a result, any garbage bins issued to residents at that time are now almost 20 years of age. The amendment bylaw states, if waste collection bins (garbage or recycling) that are 15 years or older become damaged beyond repair, the city will cover the cost for a new one. Previously, residents were responsible for covering any costs associated with replacing lost, stolen or damaged bins.

“The third change is to reduce the garbage fees by $3.70 per each bin, which works out to be about $11.10 per quarter,” Burton continued. “We spent a couple of years since implementing the curbside recycling program and we did see a reduction in the tonnage we pay to the landfill because of the recycling being diverted out of the landfill. So, administration figured we can reduce the amount we’re charging for garbage pickup. That would come into effect Jan. 1, 2017.”

First reading of the amendment bylaw was moved by councillor Conrad Read and seconded by deputy-mayor Merlin Seymour. However, before it was approved, council had its share of questions and concerns.

Burton said city staff has communicated this to their waste collection contractor, adding the city has been told it may have to replace the majority of the blue bins before it would the much older grey ones.

“I understand the blue bins being a little lighter because they hold lighter items, but, for the sake of quality, I hope we stick with the same manufacturer as the garbage bins,” councillor Kim Chiverton said.

Seymour, meanwhile, said he only has one concern with the city’s willingness to replace damaged bins after 15 years.

Burton reassured bins will only be replaced if damaged beyond repair.

“Being dirty is not damaged,” she added.

Burton went on to say the city did consider replacing all garbage bins based on their age alone, but figured many are still in good shape and it would be less costly to replace only those severely damaged.

According to Burton, the city currently replaces anywhere from five to 20 garbage bins in a given time. Only originals, she reiterated, would be replaced if damaged, nothing less than 15 years old.