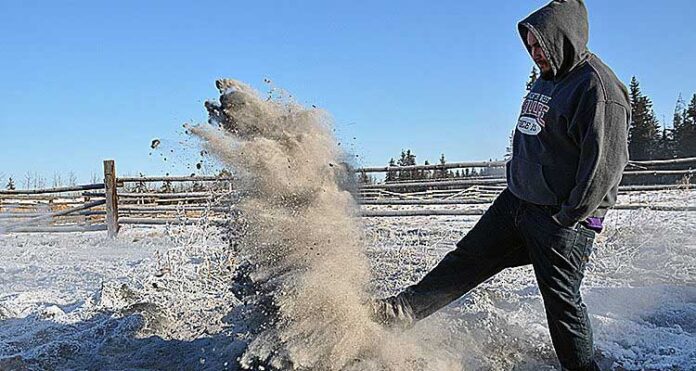 Losing a number of hay bales to fire was definitely not on Gwen and Daniel King’s Christmas wish list this year.

However, that’s exactly what happened last Wednesday morning (Dec. 14) when Gwen King was alerted by her brother-in-law and neighbour, Dwayne King, of smoke coming from their property north of Meadow Lake on the Bear Creek Road.

“Dwayne phoned me around 6:30 a.m. to ask if we were burning anything,” Gwen King explained. “He could see smoke and thought there was a fire near where we keep our hay bales.”

Arriving on the scene minutes later, however, King said it appeared someone had either driven up or backed up to the bales and lit them.

“I don’t know if they simply threw a match or if they did something more, but we lost about 60 bales in total and a few more were smoke damaged,” she said. “We didn’t call the fire department – we just let the fire burn itself out. I did report it to the police, though, because there were a set of tire tracks leading right up to the bales.”

The bales, which belong to both Daniel and Dwayne King, are primarily used by the Kings’ grandchildren as feed for their horses, as well as for other livestock. Gwen King went on to say, depending on how harsh winter is, they may have no choice but to buy additional feed if need be. Dwayne King concurred.

“I guess we’ll have to pay to replace the bales we lost,” he said. “Usually we have just enough to get us through the winter, so we’ll have to see how things go.”

Nearby resident Betty Murray also lost a hay bale to fire the night before. Murray lives about eight miles west of the Kings and this, combined with the discovery of tire tracks leading to the edge of where the Kings’ bales were located, has raised suspicions.

“It’s such a senseless crime because nobody really gains anything from it,” he said.

While the investigation was still underway as of press time, according to Meadow Lake RCMP Sgt. Ryan How, there wasn’t much in the file for officers to go on. How did confirm the fire was reported to police.

How went on to say it’s not uncommon for hay bales to sometimes start on fire on their own.

“I’m not saying that’s what happened here, but I grew up on a farm and I think it’s a little harder to start a fire intentionally than for one to start on its own in the type of (cold) weather we were experiencing when this incident occurred,” he added.

In the meantime, Gwen King warns neighbours to be vigilant when it comes to protecting their property.

“Keep an eye out,” she said. “If you hear or see a suspicious vehicle, see who it is and report it. No one benefits from this sort of thing.”