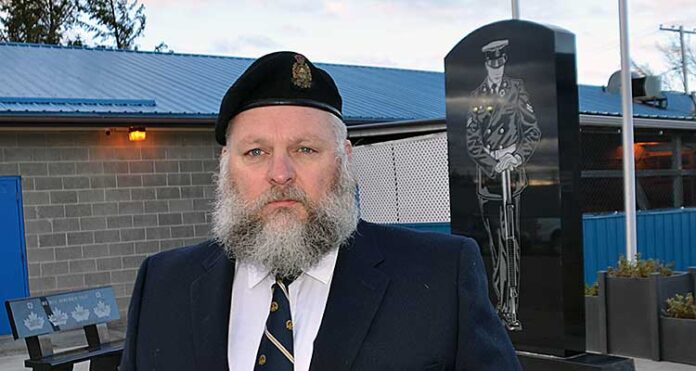 Remembrance should never be restricted to only one day of the year.

“We’re trying to be more inclusive this year,” Brownrigg explained. “This includes organizing a door-to-door campaign, as well as recruiting other groups such as the Girl Guides to assist us. By getting other groups to help out, we don’t have to rely on only a handful of Legion members to step up and volunteer.”

Funds generated by the poppy campaign are used to assist area veterans. The campaign is scheduled to begin the last Friday in October and continue to Nov. 11. It’s also Brownrigg’s plan to organize some sort of initiative each day during that timeframe to help the public remember the sacrifices made by those who fought and died during times of war.

“That’s why I want so many different people and groups to be involved,” he added. “This way, we can ensure the campaign’s success and also ensure those who made the supreme sacrifice are remembered for more than just a couple of hours on Remembrance Day itself. As generous as people have been in past years, there has been a significant decline and this is the beginning of our efforts to turn that around.”

While several initiatives are still in the planning stages, one thing the Legion already does to promote Remembrance Day is its annual poster and literary contest open to students from schools throughout Meadow Lake. This year, however, contest winners will be recognized in their respective school settings opposed to the Nov. 11 ceremony at the Meadow Lake Civic Centre.

“This way, they can be recognized in front of their peers while the ceremony itself can remain as more of an actual Remembrance Day parade,” Brownrigg noted. “I’ve also spoken with a local car dealer who will be looking to bring other car dealers onboard to offer rides to and from the service for seniors and veterans with mobility issues who otherwise would be unable to attend.”

Brownrigg also plans to have a special section at the Nov. 11 ceremony for the families of military and RCMP veterans. Although he said this isn’t a huge gesture, it still allows for them to be acknowledged for the sacrifices they too have made.

In years gone by Brownrigg said the Legion was also known to have given up to $70,000 or more a year back to the community through various initiatives.

“Now we’re fighting just to keep the doors open,” he said. “This is why I plan to do whatever we can. I know this community cares and I hope the community proves me right.”