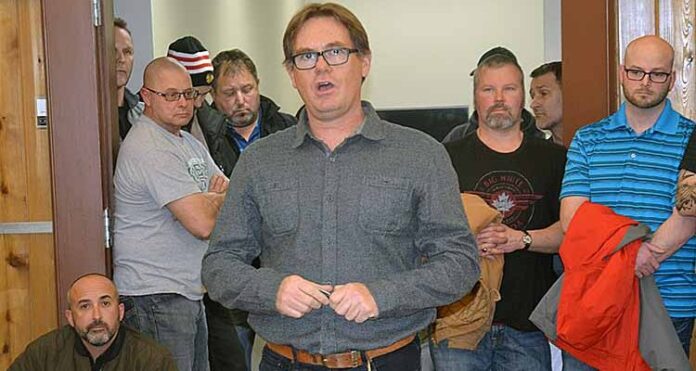 Some seniors in Meadow Lake will have to rethink where exactly they will some day call home.

During the regular meeting of Meadow Lake city council held Jan. 8, council voted in favour of rescinding a zoning amendment bylaw that, if fully approved, would have seen four lots on Larocque Drive converted from low density residential to high density residential to allow for the development of an $8 million, four-storey, 24-unit rental property designed to provide independent living for residents aged 55 and up.

According to councillor Conrad Read, who made the motion to rescind, the proposed development does not fit with the consistency and scale of current development in that area.

“I do see there is a need for a type of seniors’ housing for 55-plus, but at this time I can’t see it going into this location,” Read explained. “I’ve always looked at that area from my backyard and seen it as residential, low density, and it’s for those reasons I would ask for the bylaw to be rescinded.”

Read’s sentiments were not only echoed by several of his fellow councillors, but also by numerous ratepayers who voiced their concerns about the proposal during a public hearing held earlier in the evening. The council chamber was filled beyond capacity with people opposed to the development, as well as some who were in favour of it. Those in favour spoke about the need for a seniors’ building that doesn’t fall under the auspices of social housing, noting the proximity to the golf course and Lions Park would be an asset, as would the freedom from having to maintain an entire house and property at an advanced age. Meanwhile, those opposed shared a variety of concerns including a potential increase in traffic, parking issues, a decrease in property value, a loss of privacy and more.

Councillor Kim Chiverton, meanwhile, was the one councillor in favour of the development going ahead.

“I see a truly dramatic need for this kind of housing in our community,” he said. “I look out my window and wish there were fields, trees and streams, but I appreciate – to have the conveniences of a city – there are some sacrifices that need to be made. If they (seniors) are not here, they’re going to go somewhere else (another community). This development is an opportunity we can’t take lightly. There are also a lot of what ifs here (based on the concerns raised), but I think we’d actually see a beautiful facility, nicely landscaped and, at $2,000 a month and $65,000 down, I don’t think you’re going to be dealing with a whole lot of riffraff.”

The development was proposed by local business owners Terry and Tammy Villeneuve who were also in attendance to address public concerns.

“We appreciate and respect all points of view, but our intention is and always has been to raise awareness of a housing gap in this community and find a solution,” Tammy Villeneuve said. “This project is our solution to a problem raised by many seniors in our community. The 70s and 80s can be a very difficult time of life. Many people have lost their partners or face health challenges. Housing is yet another challenge… Currently, there is only social housing available for senior rentals, and many of our citizens do not qualify. Where do these (active) seniors go now? Most leave our town, but many have family here and this is where they want and deserve to live.”

As noted earlier, however, council voted to rescind the bylaw, effectively putting a stop to the project.

“This has been a struggle,” mayor Gary Vidal stated. “As much as I would hate to say no to this because there’s so much positive merit to it, I think I would land on the side of the expectation that’s been created for our folks already living in that area.”