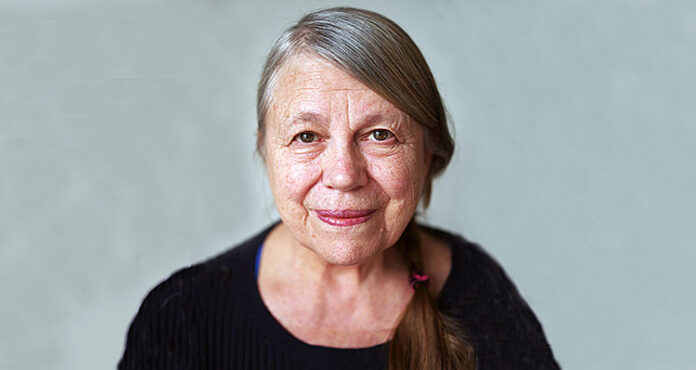 It took a community to raise a child and now that child wants to give back.

Former Meadow Lake resident Sandra Semchuk said her first priority after recently being presented with a Governor General’s Award for her contributions to photography and lens-based media is to acknowledge the people of Meadow Lake who supported her during her formative years and ultimately helped lead her down the path she decided to follow in life.

“I have such gratitude for the people of Meadow Lake,” Semchuk remarked. “I used to paint pictures of cowboys, cowgirls and bucking horses on all the shop windows up and down main street – something I started doing when I was seven years old and continued until I was in my early 20s. My dream was to become an artist and I received so much support from the people of this community during those very influential years. How people see you can have so much effect on how you identify yourself.”

Currently teaching at Emily Carr University in Vancouver, Semchuk is known for her dynamic, collaborative approach to photography, which she has practised actively since the 1970s. Her work is often narrative or autobiographical, and uses dialogue across generations, cultures and species.

She also worked collaboratively for 15 years with her late husband, James Nicholas, a Cree actor and orator, to consider potential conciliations within the self and between the indigenous and non-indigenous. Their dialogue was grounded in experience – in the primary knowledge of place – land, flora and fauna and weather – and in human stories.

“Semchuk’s work reminds us of the necessity to continually rethink our positions as artists, as speaking subjects, as listeners,” noted fellow artist and nominator Althea Thauberger.

The people of Meadow Lake, meanwhile, have often been the focus of much of Semchuk’s work. She returns to the area yearly, but fondly recalls a time in 1974 when she displayed a number of her photos outside Madill’s Drugs.

“People thought there had been an accident or something because of the crowd that gathered,” she said. “What they saw were some wonderful photos.”

One of the more popular ones featured barber and farmer Charlie Beiswanger.

“The photo is of Charlie sitting on a tractor at his farm and his dog is leaping up toward him,” Semchuk explained. “A lot of people who saw the photo that day did not know Charlie even had a farm. They only knew him as the local barber. That’s the kind of work I love to do and I would like to come back and do something like that again.”

The daughter of Meadow Lake’s Martin and Josie Semchuk, Sandra Semchuk is also the co-founder of the Photographers’ Gallery – an artist-run gallery in Saskatoon – and an author. Her book, The Stories Were Not Told, which focuses on the internment of Ukrainians in Canada, will be published later this year. Her photographs, meanwhile, have been exhibited in B.C., Saskatchewan, Manitoba, Ottawa, Arizona, New York, San Francisco, Scotland and Spain. As a recipient of the Governor General’s Award – administered by the Canada Council for the Arts – Semchuk’s work will be displayed at the National Gallery of Canada in Ottawa March 29 to Aug. 5.

“I feel such joy to receive this honour,” she added. “It is such a deep pleasure. “I grew up in an era of democratic socialism in Meadow Lake – around that sense of people working collectively and collaboratively. My work is the same, and to receive such an award is an acknowledgement of these values that are so important to me.”