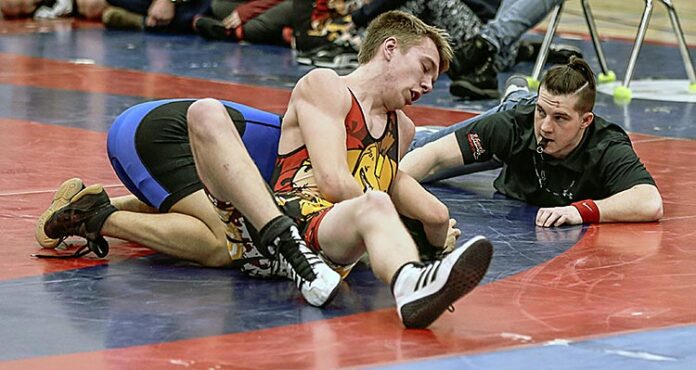 Meadow Lake’s Carpenter High School is once again looking to leave its mark on the provincial wresting mat.

This past weekend, 11 of the 17 wrestlers (nine from CHS and two from Jonas Samson Junior High) who attended the Saskatchewan High Schools Athletic Association (SHSAA) regional tournament in Swift Current advanced to this weekend’s provincial competition in Saskatoon.

“We are up three from last year, which is great,” remarked CHS wrestling coach Jason Guenther. “The boys also managed to defend their 3A regional championship from last year, but the girls lost theirs to Warman High School.”

“I was a bit disappointed William got knocked out of provincials, as it is his Grade 12 year,” Guenther said. “Ethan and Brenton got knocked out too, but at least they have another shot next year. Melinda, Cheyenne, and Nathan also got knocked out, but they were all first-year wrestlers and I was not disappointed in how well they did considering their lack of experience. I have no doubt they will all do better next year.”

This was indeed the case for Vandale-Niccolls, who failed to qualify for provincials in 2017, but took top spot in his weight category at Saturday’s regional event.

“It definitely felt really good to go from a double knockout last year to first place this year,” Vandale-Niccolls said. “I’m looking for at least a placement at provincials – I don’t want to get too cocky – but, either way, I hope all the training I’ve put in pays off and I can give a really good showing.”

“I’m just really hoping for the best at this upcoming provincial tournament,” he added.

Guenther said he is also looking forward to this weekend’s provincial competition.

“We just need to keep smart, in shape, and nurse any injuries we got from this tournament,” he noted. “Some of our athletes also have to be careful not to gain any weight this week. So, good diet and exercise are our goals this week. I am hopeful for many of our athletes to get a medal, but as I’ve said before, I do not want to jinx anyone.”