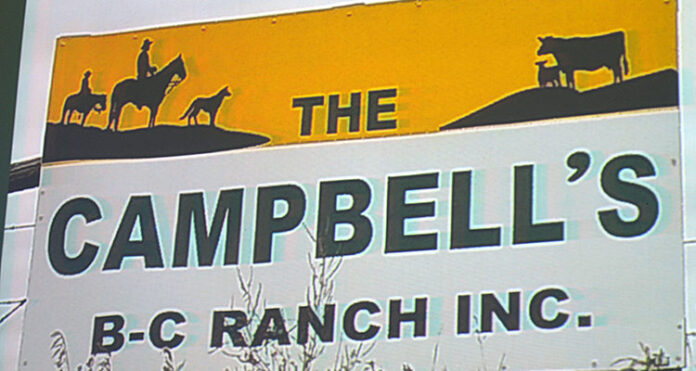 Seventy years is a long time.
But, that’s exactly the number of years the B-C Ranch, located just south of Dorintosh, has been in existence and, last Saturday evening (Sept. 15), the Campbell family paid tribute to those who helped them reach this milestone.

“We are so glad all of you are here tonight,” said family patriarch Don Campbell to a crowd of about 250 people. “Thank you for coming and thank you for blessing us with your friendship. We’d be grateful for you to think about some of the memories of the people of the B-C, the times we’ve had and things we’ve done these last 70 years.”

The celebration was held at the Dorintosh Hall where the Campbells treated their guests to a roast beef dinner, a program featuring speeches and photos of the ranch, topped off with a dance and music from Jim and Martin.

“The ranch started in 1948, but the seeds go back to the early 1920s,” Campbell continued. “At that time, my dad’s (Bruce Campbell) family was living in the Duck Lake area. When he was a teenager, his dad travelled by wagon to Meadow Lake where he wintered cattle for the Burns Cattle Co. He was up here for two or three years and, when he would go back, he would tell my dad, ‘Meadow Lake is a wonderful, wonderful area. There’s an abundance of wildlife, fur-bearing animals and the hay is as tall as a horse’s back along the Beaver and Meadow Rivers.’”

Later, in 1934 while working in Spiritwood, Bruce Campbell had an opportunity for a job with J.B. Clark and moved to Meadow Lake. He worked at Clark’s dry goods store and fur buying business a few years and then left to open up his own store.

“He started selling the same things the Clarks were,” Campbell stated. “Even though they were in opposition, dad and Fred (Clark) and the two families remained lifelong friends.”

Then, in 1948, Bruce Campbell purchased the Barnes Crossing ranch.

“At the time of sale, there were between 50 and 60 head of mixed cattle on the ranch and (my dad) increased the acreage, improved the carrying capacity and built up the herd,” Campbell said.

Today, it’s a third generation ranch with Campbell’s sons, Scott and Mark, and their families running the operation.

“Tonight is not a celebration of anything Mark and I have done, it’s about our parents and our grandparents,” Scott Campbell said. “I have a lot of respect and admiration, not only for my grandparents, but that whole generation – the pioneers. Lots of people came here with nothing and settled this land, and we owe them a great debt of gratitude.”

He also said the ranch always had a hired man.

“I think that was important growing up,” he added. “That way we weren’t tied down, and the family could get away if needed. Of course you don’t go through 70 years of business and ranching without some tough times. And all three generations had them for sure. It’s not been 70 years of roses. And, of course, you lean on your family and maybe even your extended family, but for sure you lean on your friends. All of you, in one way or another, have contributed to our success and I want to thank you for that. We wouldn’t be here without you folks.”

Don Campbell listed several families that lived on the ranch at one time or another. Pete and Simone Ross and their children were one such family.

“I was only there one year, in the early 1960s, but I’ll never forget the good times we had,” Pete Ross said. “They hired me to be the foreman and I was mostly responsible for fixing things, breaking horses and making sure all the men were working the way they should be working. During haying season we had quite a bunch of guys working there. Bruce Campbell treated me real good.”

However, the Ross family’s time at the B-C ended when Pete’s mother died.

“After my mom passed away, my dad (Benny) said I should come back and run his ranch, so I did,” Ross added. “But, I still remember old Bruce wanting me back. He said, ‘you name the price, and I’ll pay it’. But, I had to go back home. I couldn’t leave my dad all alone.”