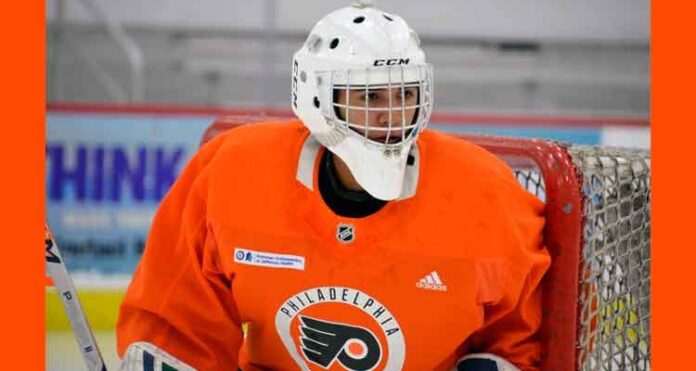 Meadow Lake’s Roddy Ross, who last season was signed by the Western Hockey League’s (WHL) Seattle Thunderbirds, is on to the next step in his hockey career after being drafted by the National Hockey League’s (NHL) Philadelphia Flyers during the 2019 NHL Draft held June 21 and 22 in Vancouver, B.C. Ross, a goalie and a member of the Canoe Lake Cree First Nation, was selected in the sixth-round, 169th overall, and was the 17th goalie taken in this year’s draft.

“This means everything to my hockey journey and career,” Ross told Northern Pride when contacted in Philadelphia this week. “After all the sacrifices my parents and family made for me, this has made it all worth it. I’m really happy the Flyers have drafted me because I’ve only ever heard good things about them and I’m excited to get to know the organization.”

Ross, went on to say, however, the real work starts now.

“I can’t wait to get at it,” he said. “It’s going to take a lot of determination and drive in order for me to achieve my dream and play in the NHL. I want to continue to be a role model not only for the people in Meadow Lake, but to the Indigenous kids who want to play in the NHL one day.”

Ross’ hockey career began here at home, first as a fan of the Meadow Lake Stampeders and then as a member of Meadow Lake Minor Hockey. Shortly after hitting the ice for the first time at the Pre-Novice level it was evident Ross was more interested in stopping the puck than chasing it and he quickly strapped on the goalie pads for the very first time.

He played minor hockey in Meadow Lake until he reached the Peewee level. Looking to play higher-caliber hockey, Ross travelled to North Battleford to compete in Peewee ‘AA’. From there, he went to Lloydminster where he eventually earned a spot on another ‘AA’ squad. The next year, he went to a Midget ‘AAA’ team in Lloyd and was later scouted by the WHL’s Red Deer Rebels.”

The following season, Ross attended the Red Deer rookie camp before returning to Lloydminster to gain more experience at the ‘AAA’ level. He also spent some time playing Junior ‘B’ hockey in Onion Lake before returning to ‘AAA’ competition as a member of the Tisdale Trojans. After visiting the Camrose Kodiaks of the Alberta Junior Hockey League (AJHL), Ross decided to sign there, gave stellar performances between the pipes and eventually, was noticed by a Seattle scout. He played with Camrose until this past New Year’s Eve when Seattle called and gave him an opportunity.

Ross played 25 regular season games with Seattle, letting only 68 goals past him out of 842 shots. Amateur scout Mark Greig and Flyers’ goaltender development coach Brady Robinson pushed hard for Ross during the recent NHL Draft and their efforts paid off.

“He (Ross) is a guy that came on the scene late,” noted Flyers’ assistant general manager Brent Flahr. “He’s a big kid, he’s got to grow into his body. He played very well down the stretch on an average team where he faced a lot of shots. He battled and Brady thinks he has pretty good fundamentals.”

Among those ecstatic about the recent happenings is Ross’ father, Marty Ross.

“Oh, it’s huge – this is every parent’s dream,” the elder Ross said. “We are so proud of him and excited. With that said, we aren’t content with where he’s at. It’s just a stepping stone and now we have to keep encouraging him to work hard and sign a pro contract.”

“I want to thank everyone from Meadow Lake for all the help they gave me and everyone else who has helped me get to where I am today,” he said. “Also, a special thanks goes out to all my friends and family.”