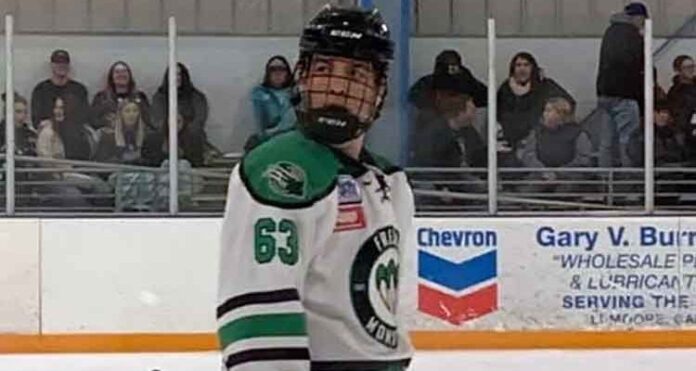 The Meadow Lake Junior ‘A’ Mustangs may have opted out of this year’s Western States Shootout – the Western States Hockey League’s showcase held each December in Las Vegas – but one local athlete is taking full advantage of his opportunity to shine at such a major event.

Triston Mirasty, who this season plays with the WSHL’s Fresno Monsters in Fresno, California, is right in the thick of things as he and his teammates compete at the Dec. 17-20 event held at the Las Vegas Ice Centre. As of this week’s sports deadline, the Monsters had one game under their belts, a 7-3 win over the Bellingham Blazers, during which Mirasty gained an assist.

“It’s going really great,” the 16-year-old forward told Northern Pride. “We got our first win and there are lots of scouts here, along with a lot of good teams.”

Also on hand for the showcase event is Mirasty’s father, former pro hockey player Jon Mirasty. He said, since joining the Fresno squad, his son has vastly improved in terms of his ability to perform on the ice.

“A friend of mine who followed my pro career reached out to me and asked if Triston would be interested in playing for the team,” Jon Mirasty explained. “Personally, I thought it would be a great opportunity for him. We flew him down, he joined the team and he’s loving it.”

The Monsters are currently ranked first overall in the WSHL’s Western Division standings with 18 wins, seven losses, one overtime win and one overtime loss. Mirasty, who has played in all 27 games this season, has scored five goals and contributed seven assists.

“They play four lines, have some really good players – including some kids from Russia – and, even though the season started out a little rough, they’re now sitting in first place,” Jon Mirasty noted. “Triston is skating every day, working out in the gym and is really developing as a player. Before going to Fresno, he attended Notre Dame (in Wilcox, SK where he played Bantam ‘AA’) for two years and, in that time, I did not see as much of an improvement as I have seen in him this season alone. I’m really glad we made the decision for Triston to play for this team.”

“Everything is so much bigger when compared to where I played before,” he said. “There’s a lot more people, a lot more fans, and it’s just a lot better hockey.”

Although he’s far from Meadow Lake, Mirasty still has family who can look out for him and, sometimes, attend games.

“My wife is originally from Bakersfield, California, which is about an hour-and-a-half south of Fresno, so we have family close by which makes his stay in California that much easier,” Jon Mirasty said. “This (showcase) is my first time getting to see him play for this team, however.”

Jon Mirasty went on to say he is very pleased with the WSHL and what it has to offer.

“From talking with a number of my hockey buddies, a lot of scouts attend this showcase and it creates a lot of publicity for the kids,” he added. “It can be a great way to get a foot in the door to something even bigger and better. At first, I wasn’t the biggest fan of this league, but with what I have seen in terms of the success my son has found, I’m very impressed. It’s given him the opportunity to do what he loves, while I’ve also been monitoring his schooling as closely as possible, So far, everything is working out just fine.”

Triston Mirasty has aspirations to one day play college hockey.