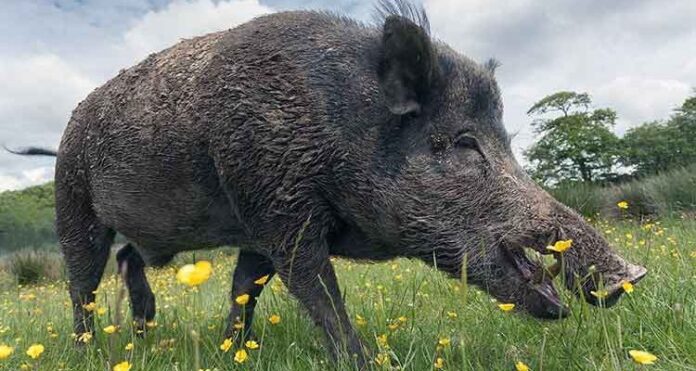 With the latest reported sighting occurring as recently as this fall, the presence of wild boars near the RM of Meadow Lake can no longer be described as hogwash.

“One of our customers reportedly saw two wild boars over on Turtle Lake Road a couple of months ago,” remarked Michelle Burnard, owner of Moose Country Service on Highway 4 south of the RM of Meadow Lake. “That’s only about 10 minutes away from my store.”

Burnard went on to say rural residents should be wary of wild boars because of their ability to quickly destroy crops, as well as their reputation for killing dogs and other family pets they could encounter if and when they venture onto someone’s property.

“Be careful of your pets,” Burnard warned.

According to a 2017 report, an associate professor at the University of Saskatchewan said wild boar sightings were on the rise in the province and he was hoping to find out just how many of the pigs there are in Saskatchewan so measures could be taken to control the population growth.

“In the late ‘80s, early ‘90s, they were brought over from Europe and Asia and raised as meat,” said Ryan Brook in an interview conducted by the CBC. “What happened is a lot of animals escaped, and many producers went out of business and just cut their fence and let them go. They’ve really taken off in the wild.”

According to RM of Meadow Lake chief administrative officer (CAO) Gina Bernier, there have been wild boar sightings in the rural municipality, but nothing recent as far as she is aware.

“There was a fellow who put up a trail cam close to where I live three or four years ago and the trail cam picked a couple of them up,” Bernier said. “There hasn’t been any sightings since that I know of, but I think that’s mainly because they like to stick to the forested areas.”

However, Bernier went on to explain how she attended a Saskatchewan Association of Rural Municipalities (SARM) convention one year which included a talk about wild boars and the impact they can have on a given area.

“They referenced a situation in Texas where a guy went to combine his corn crop – he had about 100 acres of corn – and when he went out to do it the next day, it was all gone because of wild boars,” she said. “They can cause a lot of damage and, in fact, can also kill your dogs and other pets. They move fast and are very aggressive, and from what I understand, are very hard to kill.”

Meanwhile, Brook also noted an increased wild boar population has the potential to harass livestock and even transmit disease. Bernier echoed this stating they also multiply quite rapidly.

“One rumour I heard is some wild boars were brought in for a hunt that was set up in the Neeb area years ago and a couple of the boars got away,” she said. “They also have very large litters and can multiply quickly, but aside from the trail cam sighting a few years ago I haven’t heard anything more for sure.”