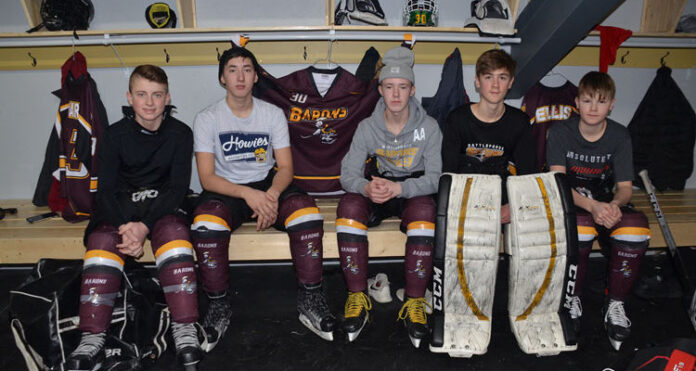 Sunday’s Meadow Lake Senior Broncos provincial game against the Watrous Winterhawks proved to be somewhat of a homecoming for a group of young Meadow Lake athletes.

Five Meadow Lake boys – Colt Desjarlais, Dylan Twidale, Ryder Ellis, Dawson Gerwing and Stajyn Laird – who this season have been toiling in the Saskatchewan ‘AA’ Hockey League as members of the Battlefords Bantam Barons, returned home as invited guests of the Broncos this past weekend. Desjarlais is the only second-year Bantam aged player while the other four are first-year players. The quintet was given the opportunity to not only warmup with the team prior to Sunday’s provincial game, but to also receive some insight and encouragement from their local heroes.

“We heard from one of the Broncos coaches they were going to see if we could do a warmup with them as a way of showcasing us to the people of Meadow Lake and to show other Meadow Lake players you can make something of yourself by travelling for hockey,” Desjarlais said when interviewed prior to Sunday’s game. “It feels pretty good to be asked to take part. We’ve had a rough season, but we’re happy to come here and be a part of today’s warmup.”

According to Broncos manager Darryl Worms, the senior team has been doing its part all season long to include not only Meadow Lake Minor Hockey teams, but also Meadow Lake Skating Club members in its endeavours.

“The figure skaters sometimes go out and do their routines during intermission and they also carry the flag when the national anthem is played prior to our home games,” Worms explained. “We bring the minor hockey kids in to show them, even though we’re older and we have some players on our team who have gone on to do incredible things like play in the NHL, we’re really just like them. We’re the minor hockey kids all grown up. It’s our way of giving back to the local hockey community.”

Worms went on to say the Broncos have been talking to many of the younger teams so far this season. Members of Meadow Lake’s Peewee provincial team were invited to take part in a similar dressing room talk and to be part of the Broncos’ warmup prior to Saturday’s SaskAlta Hockey League playoff game against the Hillmond Hitmen.

In terms of the Battlefords players involvement, Worms said it’s important to give the local kids on that team a chance to be seen by family and friends in Meadow Lake and to help people understand the commitment involved when it comes to playing hockey at that level.

According to Ellis, it means a lot for the Broncos to ask him and his teammates to attend Sunday’s warmup.

“Its pretty cool to be invited here… it’s nice to skate on home ice for once this year,” he said.

The Barons are currently ranked 10th overall in the Saskatchewan ‘AA’ Hockey League’s North Division standings with a record of 6-20.