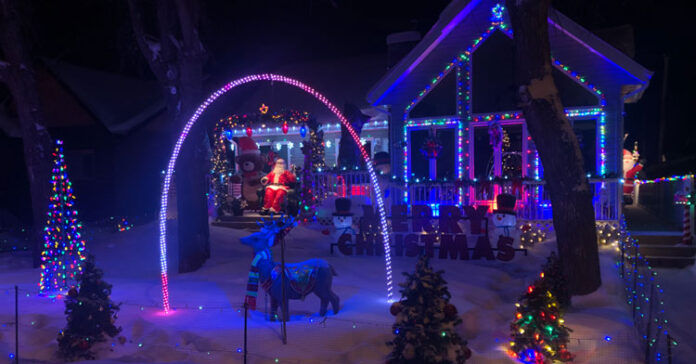 Everyone has heard of Miracle on 34th Street. Now it’s time to learn a little more about Christmas on 1st Street.

That’s what Meadow Lake resident Denys Jenner calls the light show he and his wife, Louise, have been displaying outside their home each Christmas for the past three years.

“We’re located at 307 1st St. West in Meadow Lake and the light show itself is called Christmas on 1st Street,” Jenner explained. “We are originally from Edmonton and lived fairly close to Candy Cane Lane, so we have been doing something like this for a very long time.”

Candy Cane Lane is a holiday light show tradition established in 1968 and organized each year by homeowners in Edmonton’s Crestwood and Parkview neighbourhoods.

“We moved here five years ago and I thought I would try to put a little smile on people’s faces here by putting on a light show of our own for the people of Meadow Lake,” Jenner continued. “The hope is the rest of the neighbours will eventually follow suit and we can have something similar here.”

Jenner went on to say, since the debut of Christmas on 1st Street, the display has been getting bigger year-after-year.

“It’s getting bigger all the time,” he said. “I went with a lot of LEDs this year, which involves a lot of programming and such. It is evolving more and more all the time. I need a bigger shed now.”

Such an ambitious project, he added, involves a lot of time and preparation.

This year’s display includes about 4,800 lights.

“The inspiration comes from me,” Jenner said. It’s not a planned thing, but I kind of know in my own mind what I would like to see, I put it together and away we go.”

He also said it is quite popular with members of the public.

“We have people stop and take photos and videos, people congratulating us on the show, they say they like to take their children to see it and are happy we do it every year,” he said. “That’s what it’s really all about. We just want to put smiles on people’s faces especially these last few years with the way things have been going. If I can put smiles on people’s faces, it makes it all worthwhile for me.”

Jenner also admitted Christmas is his favourite holiday of the year.

“It’s also our busiest holiday,” he said. “The inside of the house is the same, we just don’t have the traffic flow going through there. I guess I’m like the old fly on the wall – the lights attract me. It gives me an excuse to do something I enjoy doing, so I do it every year. It will continue to be an annual thing and our neighbours are slowly coming along. Each year I notice other people putting a few more lights up. I wish everyone in Meadow Lake and surrounding area a Merry Christmas and a Happy New Year. And, come on out and enjoy the lights.”