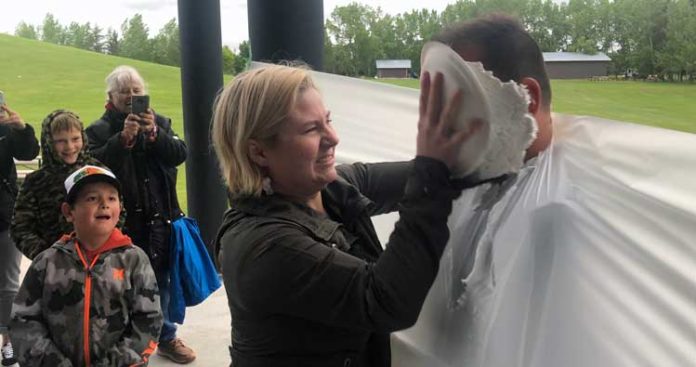 Telemiracle 47 in Saskatoon may still be nine months away, but that isn’t stopping the Meadow Lake Kinettes from doing whatever they can now to provide their share of the overall fundraising pie.

After a month of collecting donations online for its first-ever Pie in the Sky event, the ‘fun’ in ‘fundraiser’ was experienced at Lions Park last Thursday (June 23).

“I actually borrowed the idea from another club (in another community), which did it’s own Pie in the Sky event and raised about $40,000,” explained Kinettes member Alyson Hill. “We’re happy with the results. I’m not going to complain, but, hopefully, next year it will be bigger.”

For the past month, the public was encouraged to donate funds to the Kinettes by bidding on a list of candidates. For every dollar donated, the candidate of choice would receive a point with the top 15 on the list by the time bidding closed agreeing to receive a pie in the face during the June 23 celebration.

Among those who were pied was Geoff Barton of The Medicine Shoppe in downtown Meadow Lake, himself a member of the Meadow Lake Kinsmen.

“Kinsmen and Kinette clubs around the province have really come out of the pandemic full speed,” Barton said. “Meadow Lake’s two clubs maintained membership over the last two years, where across the country we saw a 25 per cent decrease in active members. So, for me personally and as a Kinsmen member, it’s important to support these events, even if it means taking a pie in the face. Truthfully I was hoping to fly under the radar on this, but a pie in the face is classic comedy.”

Meanwhile, according to Hill, the local initiative raised about $400.

“It’s new, so we’re hoping people will see what we’ve done this year, spread the works and it will help it to become bigger and better next year,” remarked Paramzchuk, who is also a member of the Kinettes.

“We haven’t seen one of these in Meadow Lake before,” she said of the fundraiser.

TeleMiracle is a 20-hour, annual telethon organized by the Kinsmen Foundation that is broadcast live in Saskatchewan. Despite only having a population around one million people, residents of the province have helped the foundation raise more than $145,000,000 since 1977. The telethon is traditionally aired in March of each year.