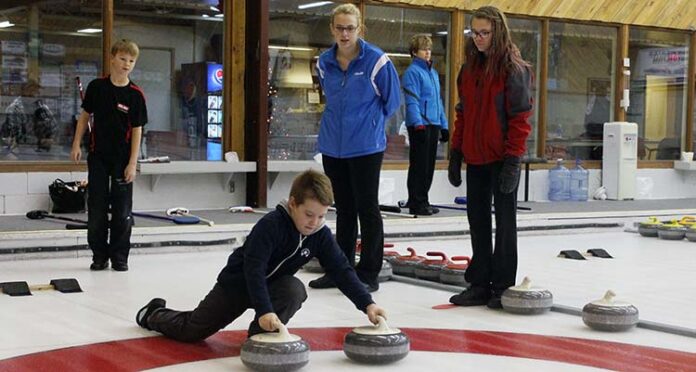 Some of Meadow Lake’s younger folks are in the midst of a junior curling program at the PineRidge Ford Curling Club.

Close to 30 children between the ages of six and 12 have been attending training sessions since Nov. 9. They’re being coached by several members from Carpenter High School’s (CHS) curling squads and are supervised by Kendra Paramchuk. She’s been the school’s curling coach for many years and said the younger kids get excited to learn from the older athletes.

“They’re so much more comfortable instructing and they take pride in the sport they’ve devoted so much time to,” she remarked. “Many of these kids went through the same program and know what it’s all about. They’re passionate about it, so I think the little kids are more involved because they see these high school students who are able to curl, teach them and who just really enjoy the sport.”

Throughout the six-week program, the junior curlers begin by learning the basics of the sport. They need to be taught how to slide on the ice, throw in-turn and out-turns, sweeping, score keeping as well as the rules of the game. Paramchuk noted at the last session Dec. 14, a mini game will be held so participants can play against each other.

Junior curling has proven to be instrumental for generating interest in the sport in Meadow Lake. Paramchuk added, when parents register their children in curling at a young age, it assists the Meadow Lake Curling Club to maintain its membership.
Among the instructors is Grade 12 student Tasha Huffman. Curling is a sport she and her family enjoys competing in.

“I couldn’t wait to turn seven because I got to be in this program and I was so excited,” she remarked.

She said having the junior curling experience means someone can be more competitive sooner and enhance his or her skills while teammates learn the basics.