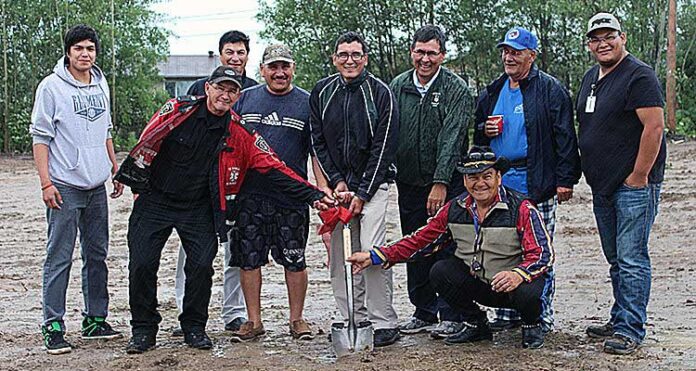 The future of commercial fishing in northern Saskatchewan looks promising as the Ile-a-la Crosse Fish Company prepares to build a new processing plant.

Shareholders gathered July 21 to celebrate the accomplishment with speeches from project partners and a groundbreaking ceremony. The $2.4 million facility will be equipped to meet Canadian Food Inspection Agency guidelines meaning products can be sold throughout Canada and overseas. Ile-a-la Crosse Fish Company chairperson Peter Durocher said the occasion shows the results of many organizations working together.

“People in this community have been dreaming of it for many years because we know this industry represents a major contribution to the economy, and to northern communities, where we still face social and economic challenges,” he stated. “In the three years since we created the Ile-a-la Crosse Fish Company, income has doubled or tripled for our fishers and it has worked to create financial sustainability in a traditional industry.”

The fish company operates as a partnership between the village’s economic arm – Sakitawak Development Corporation – and the Big Island Fisheries Cooperatives. The federal government contributed $950,000 to the new fish plant last year through Western Economic Diversification Canada and other sources of funding include the Primrose Lake Economic Development Corporation.

It was also announced investors in the region will soon have the opportunity to purchase ownership shares in the company. Durocher said the project has the chance to brighten prospects in the North and provide stable employment, but its success will depend on the motivation of the communities involved.

“Lake to the plate, it’s going to be Ile-a-la Crosse,” he remarked. “There’s nothing fresher than fish coming off the lake and being filleted right away. We were tired of sending our product south to be filleted when we have people who can do it here.”

Ile-a-la Crosse mayor Duane Favel described the opening of the new plant as an historic event.