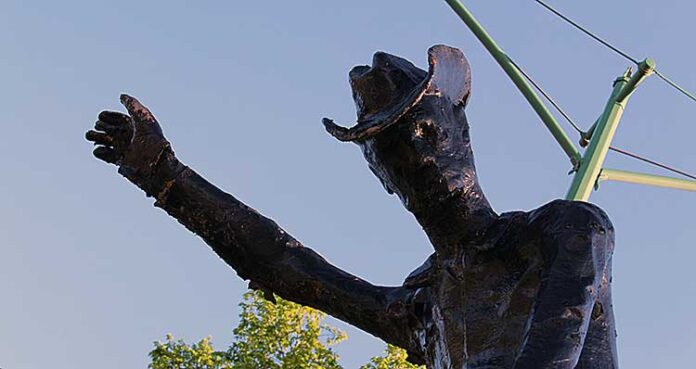 Standing tall and proud on Centre Street for nearly 50 years, the Bucking Horse and Cowboy statue was erected in 1970 as a tribute to the early settlers and pioneers of Meadow Lake. In honour of Stampede Week, Northern Pride got up close and personal with the horse and rider – where they came from, what they represent and what the future holds.

Q: You’ve stood at this prominent spot in downtown Meadow Lake for almost 50 years, but how did you get here?
A: I was supposed to be unveiled June 30, 1970 at a special ceremony during Meadow Lake’s Golden Jubilee Stampede. However, it rained a lot – can you believe that? So, the six-day show was downsized to just three and my unveiling to the public was postponed until September of that year to have more children and citizen participation. The Meadow Lake Racing and Sports Association placed me there in honour of the town’s pioneers and early settlers. I also serve as a reminder of Meadow Lake’s deep history of rodeo and wagon racing, which goes back nearly 100 years. I was put on Centre Street so everyone would see me. In days gone by, the parade used to pass right by, but its route has since been changed to go by the seniors’ homes in the community.

Q: I heard the Chamber of Commerce put on a big spread at that time?
A: That’s correct. The local Chamber honoured a group of 1920 cowboys and past presidents and their wives with a banquet at the golf course on July 1, 1970. I got to meet some of the 1920 rodeo competitors – Jimmie Evans, Bruno Sanregret, Edgar Soare and Henry Pilling. The first chuckwagon champ, Josh Delaronde, was also present. Stampede manager Gordon Alger, assisted by Mrs. Flo Clark and Mrs. Emma Madill, presented the 1920 cowboys with engraved western buckles.

Q: Who were some of the people involved with your creation?
A: This is sort of an interesting story because I was actually inspired by a photo of Makwa rancher Jim Adamson riding a saddle bronc. Martin Semchuk was the president of the racing and sports association at the time, and he, along with Gordon Alger and Richard Carter, travelled to Saskatoon to meet with my builder. They took the photo with them and showed University of Saskatchewan professor William Epp what they wanted. Epp has since passed away, but he had a prolific career creating figure and portrait sculptures which have been exhibited across Canada and the United States.

Q: Tell me more about yourself.
A: I have a metal frame and I’m coated with fiberglass. Also, I’m in an older style bronc riding stance to once again honour the pioneers of Meadow Lake. The modern style of saddle bronc riding is a horse kicking its feet back and the rider with spurs on the shoulders. A lot of people don’t understand why I was built in this way, but that’s the reason. I was also purchased for $3,500, which was quite a bit of money back then. Also, a Meadow Lake man named Fred Gagnon was the one who created the concrete base I stand on.

Q: What changes have occurred on Centre Street since your arrival?
A: Centre Street has changed quite a bit since 1970. When I first arrived I would smell freshly cooked goods every morning at the Meadow Lake Bakery that was located in the current Solitude Trophies and Frames building. The Meadow Lake Library used to be the school division office with a lot of comings and goings and the now vacant bingo hall was the IGA grocery store. Many of the older buildings were also demolished to make space for new ones and, about 10 years ago, the street parking meters were removed. I’ve really enjoyed being in my spot because it’s also a good place to watch people. The styles sure have changed and I miss the older classic cars that would cruise along Centre Street.

Q: You look like you’ve seen better days, how often are you repaired?
A: Right now, I’m missing a leg above the knee and much of my paint has chipped away. In the past, my tail has fallen off a few times from people climbing on it and stuff like that, but I’ve always been looked after. McCallum’s Autobody has also worked on me a couple times. They gave me a fresh coat of paint and one time gave me a new set of cowboy boots made from fibreglass. I’m definitely in need of some love and attention right now, though.

Q: What were the early days of the stampede like?
A: It began in 1920 just outside Meadow Lake at a place called Stuart’s Farm. It was only held there one year, before moving to land on Flying Dust First Nation near Our Lady of Peace Roman Catholic Church. In 1923, however, the stampede moved into Meadow Lake. Back then, there would also be baseball games, boxing matches and horse racing. For may years it was held outdoors with the rodeo in the afternoon and wagon races in the evening. It’s changed quite a bit, but from my vantage point the size of the parade has remained about the same. Back in the early days, the two main events were the Catholic Picnic and the stampede. When the stampede was on, nobody was at home because they were watching the rodeo or wagon races.

Q: Tell me more about the man who built you?
A: Professor Epp began teaching sculpture, design, drawing and art history at the U of S in 1967 until his retirement in 1993. He worked with clay, steel, fibreglass, stone, bronze and wood. Other sculptures created by Epp include Spirit of Youth on Spadina Crescent in Saskatoon, and the Winnie the Pooh and Lt. Harry Colebourn statue in Winnipeg. He founded the Prairie Sculptors’ Association in 1982, before passing away in 1995. Epp actually delivered me to Meadow Lake himself.

Q: People pass by you every day, but don’t know much about you. What are your thoughts on that?
A: There is a plaque on the base that says I was dedicated by the citizens of Meadow Lake in 1970 in honour of pioneers. But, you’re right – not many people remember the specifics. It’s a shame the rodeo in Meadow Lake is not what it once was. There aren’t many people left who remember the day I became a resident of Meadow Lake and why I exist. Perhaps with the rise of more advanced technology these days, people just have different interests than they used to.

Q. Have you got a name?
A. Nothing official. Every now and again when people are within earshot I hear something like, ‘That’s my uncle up there’ or ‘Hey, take my picture here with Bronco Billy’.

Q: With the stampede reaching 100 years in 2020, do you think you’ll make it?
A: I don’t know. Just like people, I’m not made to last forever but I do look pretty good for my age. It would be a nice idea, however, if I was restored or replaced in time for the stampede’s centennial celebration. Many people are still proud of my presence in Meadow Lake and feel I rightfully deserve my spot here. It could be expensive to restore or replace me, but I know if a group of people were up to the task, this community would be supportive.