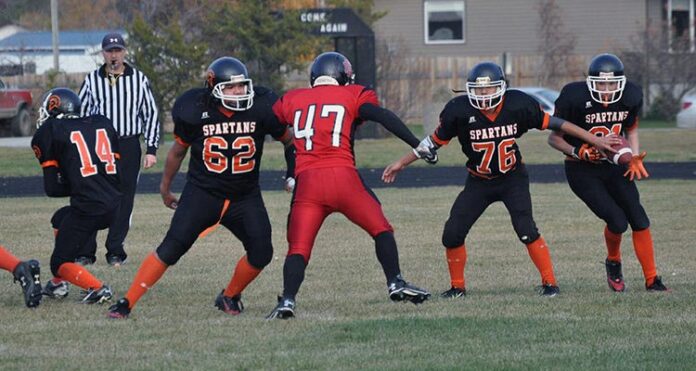 The Carpenter High School football Spartans will not contest a provincial championship this year.

This is a fact that has nothing to do with the team’s yet-to-be-determined win-loss record, but rather because the CHS squad is not a part of the Saskatchewan High Schools Athletic Association (SHSAA) for the coming season.

“We did have a football meeting today to discuss this,” explained CHS vice-principal and athletic director Kendra Paramchuk when contacted Sept. 3. “Curtis Paylor will be the staff advisor, while Michael Connolly and Kale Lajeunesse of Gateway Middle School will coach along with John Lawson. The team’s first practice is next Monday, but because of the low numbers we had during the spring training camp earlier this year and the number of former players who have since graduated, CHS will not be part of the nine-man league this year.”

This was confirmed by SHSAA assistant executive director Dave Sandomirsky who said CHS has not registered a football team. Paramchuk, meanwhile, said CHS will still compete, but during the regular season only and not in conference playdowns or provincials.

“We’re not in any league per se,” she added. “With the numbers we had, we didn’t want to commit to anything. It will be more of an exhibition season.”

Because the other teams CHS would normally compete against are part of the SHSAA nine-man league, Paramchuk said this year’s Spartans games will primarily be against more locally-based teams such as John Paul II from North Battleford, Spiritwood, Big River and so on.

“Depending on who is available, we could play nine-man games or we could even play six-man games… with our lower numbers and the recent coaching turnover (former Spartans head coach Sam Dawson now teaches in Maidstone), we didn’t want to put our guys up against the top-ranked teams in the province,” she continued.

Paramchuk said this season will serve as a time to rebuild with the goal being to return to SHSAA nine-man football next year.

“We want to do what’s best for the team and for the coaching staff,” she said.

CHS was winless last season and gained only one win the prior year after coming off another winless season the year before.

Meanwhile, other fall sports are already underway at the school. Volleyball practice for both boys and girls began Tuesday (Sept. 3) with the girls team already scheduled to compete this weekend (Sept. 6 and 7) in Prince Albert. The boys, meanwhile, will be in action Sept. 13 and 14 in P.A. The boys home tournament will take place Oct. 4 and 5 and the girls home tournament is set for Oct. 18 and 19.

“It’s going to be an exciting year,” Paramchuk concluded.