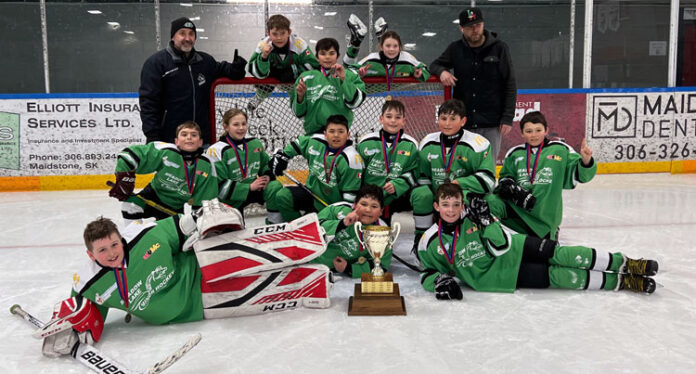 The champs are here!

This past weekend saw the Meadow Lake Thrashers win a tournament held in Maidstone to claim the U11 STEP League ‘A’ side championship. The Thrashers defeated the Turtleford Tigers 11-5 in the final to win the title.

“This is the league Meadow Lake historically plays in when it comes to the younger divisions.” explained Thrashers coach Morgan Gutek. “It’s split into four divisions, and we were lucky enough this year to have enough kids to enrol three Meadow Lake teams in the league.”

Following regular season play, the top two teams from each division competed in a preliminary best-of-three playoff, with the winners advancing to the championship tournament Saturday and Sunday (March 12 and 13).

“All three Meadow Lake teams did well in the first round of playoffs and we were all able to make it to that final tournament along with Turtleford and Maidstone,” Gutek continued. “My boys and girls on the Thrashers played really well all weekend, everything came together just at the right time, Sunday was a long day with three games but the kids all persevered and we were able to win the championship.”

This marks the end of the season for U11 Step League competition.

“I believe it was the 2015-16 season when Meadow Lake last won the U11 ‘A’ side final, so it was nice to bring the cup home with us,” Gutek said, adding he plans to be back behind the bench next season. “Some of the kids will now move up to the U13 division, while some will continue on with their second year of U11. With a cancelled season last year and an abbreviated season the year before, it was great to be able to complete a season from start to finish.”

Gutek also acknowledged the dedication shown by parents throughout the duration of the season.

“There was never any hesitation when someone was asked to step up and help out, and that’s what makes a team,” he said.