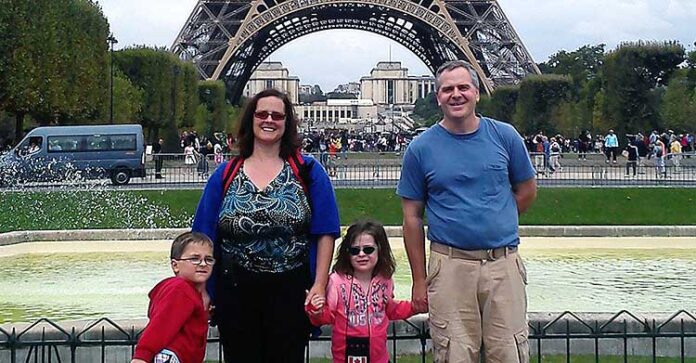 The series of coordinated terrorist attacks orchestrated last week at various locations throughout France proved to be more than a little surreal for at least one Meadow Lake family.

That’s how Jason Guenther – a teacher at Carpenter High School currently on a one-year leave – described his initial reaction upon hearing news of the mass shootings, suicide bombings and hostage-taking that occurred throughout the French capital on the evening of Nov. 13. Guenther, his wife, Kate, and children, Kaelan and Rochelle, have been living in Grenoble, France since mid-August.

“When it all happened, we were in our apartment,” Guenther explained. “I didn’t hear about the attacks until the next morning, though, when I read the news online. In my head I tried to downplay it a bit because it happened about 400 kilometres away from where we are staying. But, at the same time, it still hit a little close to home. I found I was having the same sort of feelings I had last year following the attacks in Ottawa.”

Guenther was referring to the series of shootings Oct. 22, 2014 that resulted in the death of Cpl. Nathan Cirillo. The soldier was on ceremonial sentry duty at the Canadian War Memorial when he was gunned down by Michael Zehaf-Bibeau – a dual citizen of both Canada and Libya – who was later killed when he attempted to infiltrate Parliament Hill. The situation in France, however, involved three separate suicide bombing attacks outside the Stade de France, as well as mass shootings and another suicide bombing at four other locations closer to central Paris. Meanwhile, terrorists also took hostages and engaged in a stand-off with police at Paris’ Bataclan theatre. In total, 129 victims were killed while more than 400 people were injured.

“It’s something that definitely makes you stop and think,” Guenther noted. “The day after the attacks, I was supposed to go to a wrestling tournament with the local club here. It was a two-day tournament, but the second day was cancelled because the national government had shut down all public facilities.”

The Islamic State of Iraq and Syria (ISIS) later claimed responsibility for the attacks. On Nov. 15, France launched its largest single airstrike of Opération Chammal, its contribution to the anti-ISIS bombing campaign, by striking targets in Al-Raqqah, Syria in retaliation for the attacks. France had been bombing various targets in the Middle East, including in Syria, since October.

“We deliberately did not choose to live in Paris because there’s always the threat of a terrorist attack there,” Guenther continued. “Grenoble is in the southeast of France near the French Alps and close to the Italian border. Out of the five or six places the police raided (looking for suspects), I was surprised to see Grenoble on the list. It hit a little closer to home for us that way too.”

Meanwhile, Kate Guenther, a teacher at Lakeview Elementary School in Meadow Lake also on leave for a year, remains optimistic more innocent people won’t be made to suffer because of the actions of others.

“I woke up this morning to messages from friends asking if we’re okay and how far are we from Paris,” she posted on social media Nov. 14. “We are in Grenoble, France, which is a good few hours drive. Nevertheless, we are shocked and devastated by this tragedy. Our prayers are with the victims but also with our Muslim friends and neighbours here in Grenoble and elsewhere in France who may be unjustifiably targeted with retributive prejudice.”

Jason Guenther also said his family is not about to let the unsettling nature of last week’s attacks spoil the rest of their time in France.

“The kids are going to school here and I’m keeping busy by trying to learn the language,” he added. “I didn’t know any French before coming here and, while I’m not entirely happy with my progress so far, I’m working on it. I’m also trying to learn a little bit about how they do things differently here when it comes to the sport of wrestling.”

Before leaving Canada, Guenther was head coach of the CHS wrestling team as well as the Northern Pikes Wrestling Club.

“We’ve also been doing a lot of travelling,” Guenther said. “The kids had a two-week off recently for All Saints’ Week, so we took a cruise to Istanbul, Turkey. We hit about five or six ports there.”

When he returned to France, Guenther said he read a news report about a possible terrorist threat in Istanbul.

“My first reaction was, ‘Are you kidding me?’’” he said. “But, you can’t live under a rock. It’s important to keep moving ahead, but also not to be naive This is especially true when you’re travelling with young children. We’re doing our due diligence, we’re being safe but, at the same time, we’re having the best experiences we can.”

The Guenthers are expected to return to Saskatchewan in July of next year.